US accidentally airdrops weapons to ISIS in Kobani 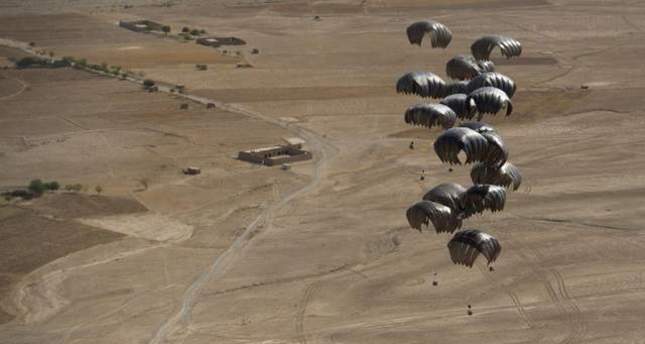 by Daily Sabah Oct 22, 2014 12:00 am
A U.S airdrop which was intended to be delivered to Kurdish fighters defending the town of Kobani against the self-proclaimed Islamic State of Iraq and al-Sham (ISIS) militants has accidentally been dropped on the ISIS side according to the media repports, raising already existent concerns that arm supplies for the Kurds might end up in the hands of ISIS via airdrops.

The U.S. on Sunday said it had dropped weapons, ammunition and medical supplies for the first time to Kurdish fighters defending the Syrian town of Kobani from ISIS. Shortly after the concerns over US policy to send supplies to Kurdish fighters through airdrops were voiced, ISIS released a video revealing that US airdrops accidentally fell to the ISIS side.

At one point, the video appears to show a masked militant raking through a chest full of hand grenades with his hands. The militants also deem the accident as a divine intervention, the footage shows.

According to a US military source, the package was mistakenly dropped on ISIS territory, but was immediately targeted by air forces. However, video footage appears to have survived any alleged attempts to destroy it.

U.S is currently working on the video footage to verify its authenticity, the media reports say.