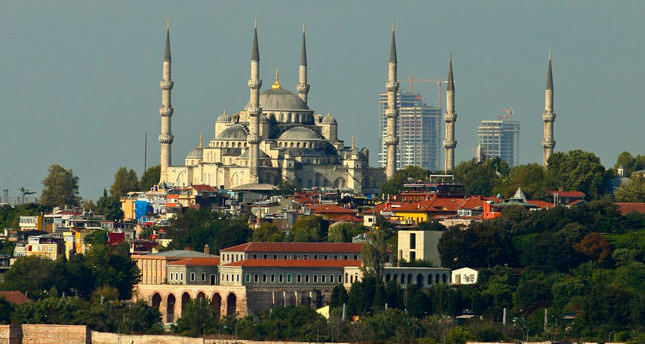 by Yusuf Selman İnanç Oct 24, 2014 12:00 am
The two-day Sixth Forum of Muslim Countries' Opinion Leaders was recently held in Istanbul in which Islamic scholars, politicians, academics and journalists from 35 countries discussed regional problems. While the focal point was the Palestinian crisis and the situation involving Al-Aqsa mosque, other crises in Syria, Iraq, Yemen and Libya were also brought to the discussion table. Turkish Deputy Prime Minister Numan Kurtulmuş also attended the program and delivered a speech.

In the opening ceremony, deputy head of the Islamic Movement in, Sheikh Kamal Khatib, said, "Palestine cannot be a state while Al-Aqsa mosque is under occupation and while the Zionist Israeli regime aims to destroy it […] Muslims must get together to defend the holy mosque." Deputy chairman of Turkey's ruling Justice and Development Party (AK Party), Nurettin Nebati, also stressed the importance of the holy site for Muslims: "Israel is sick and does not avoid committing any atrocity. Muslims must unify to defend themselves. The opinion leaders of Muslim societies have the biggest role at this point as they can direct the people."

A member of the Free Syrian Army touched on the recent developments in the Syrian town of Kobani, heavily criticizing U.S. policy. He said, "People around the capital Damascus and the district of Yarmouk have been under siege for months. The Islamic scholars have issued fatwas allowing people to eat some animals like dogs and cats, which are usually prohibited to eat in Islam, because people are dying of hunger. The [Bashar] Assad regime attacks innocent people with barrel bombs and the world does not see the situation of those people." Speaking about the airstrikes carried out by the U.S.-led anti-Islamic State of Iraq and al-Sham (ISIS) coalition, he said, "The Kurds are our brothers and ISIS only damages Syria. However, the U.S. and other global powers should have acted beforehand to save Syria. We understand that they do not want the war to end as they benefit from the chaos." He heavily criticized the view that considers ISIS a part of the Syrian opposition against the Syrian regime: "ISIS just poisons the Syrian people's revolution and struggle for freedom."

Islamic scholar Hussain el-Barnagee from Sulaymaniyah, Iraq spoke about the chaos in his country, which has dragged on after ISIS seized some Sunni cities: "After the U.S. invasion in 2003, Iraq has changed entirely. It has been surrendered to the hands of a Shiite tyranny that implements sectarian policies targeting Sunnis. Sunnis have been excluded from politics." He underlined the security problems in the country: "There is no security for Sunnis or for their property. There are many paramilitary groups. Their members raid Sunni homes with no legal right or excuse. I have witnessed people being set on fire in their gardens. Nobody mentions anything about these atrocities." He also criticized ISIS: "ISIS only damages Sunnis. The militants have captured Sunni cities and killed Sunnis. They have only deteriorated the situation in the country."

The problems in Libya, Yemen and Egypt were also discussed during the panels with Kurtulmuş saying that Turkey is ready to help any oppressed people in the region.