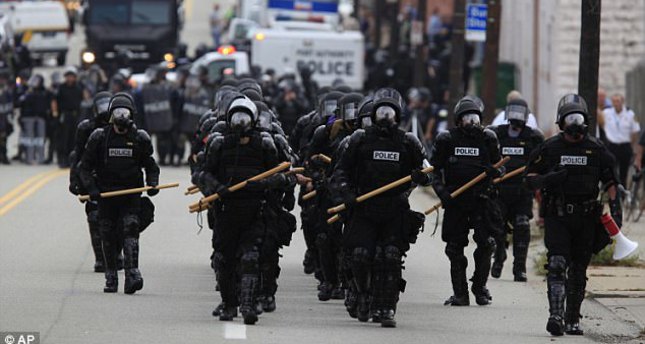 by Daily Sabah Oct 30, 2014 12:00 am
A graphic video has emerged capturing eight white police officers shooting 46 times at a mentally-ill black man in the U.S. state of Michigan. The video, released by the American Civil Liberties Union, accompanies an interview with the mother of Milton Hall, who was shot by eight officers in 2012 for refusing to drop his pocketknife. It shows a confrontation between an anxious looking Milton Hall and eight police officers forming a line with their guns pulled, in a shopping plaza parking lot. Two minutes into the video, the uniformed officers start to fire at the man. They continue shooting at him even after he goes down.

"To have eight people stand in front of one human being and shoot at him 46 times and hit him 14 times... It has been devastating to our family," says mother Jewel Hall in the interview, which was released on Tuesday. Milton was a homeless, mentally ill African-American man living in Saginaw, Michigan. The county prosecutor declined to bring charges against the officers involved, and the U.S. Department of Justice announced a decision in February that the officers would not face federal charges.

Included in the presentation was footage from an interview with his mother, Jewel Hall, who said her son's blood was "running down the street like water. And he wasn't a threat, I mean, he had a little pen knife. He had no idea that those policemen would do that to him."

In declining to prosecute, the cops and U.S. Department of Justice said investigators did not find evidence the officers had demonstrated "willful misconduct."

Milton Hall was born on April 25, 1963 in Saginaw. His mother told the ACLU that Hall spent his days as a community worker who fought for equal rights. He was an avid reader, researcher, and even received training from Rosa Parks. In his mid-20s, signs of Hall's mental disability started to appear.

"It's been devastating to our family; it was devastating to the community. And justice still has not been served," she said. "There needs to be a change in how police deal with situations like the one that ended my son's life. Our leaders have to address conditions that allow police to use excessive and deadly force with impunity."

Mark Fancher, a lawyer with the ACLU of Michigan, said, "As a civilian, Mr. Hall had every right to expect that the police would protect his life, but instead, he was the target of what resembled in many ways a firing squad. The government cannot act as if the life of a homeless black man has no value. Saginaw deserves justice not only for Milton Hall, but for the entire community that has been devastated by this inexplicable act of police violence."
Mr. Hall was "known" to authorities for committing previous offences, a police spokesperson said at the time, but his family said he had only committed minor, non-violent crimes.