Get that 'Obama or Putin look' for $44, on Chinese web 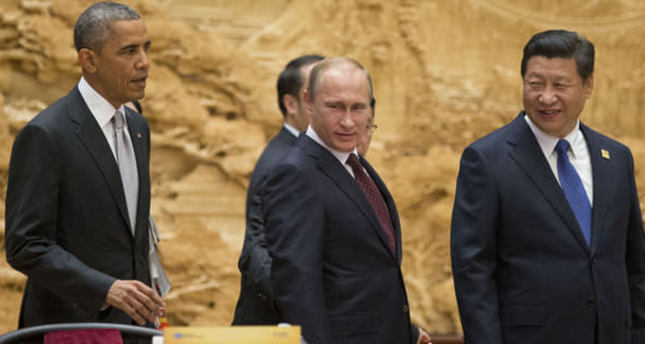 Chinese traders are offering the chance to get that "world leader look" by selling copies of the garb worn by Barack Obama, Vladimir Putin and Xi Jinping at this week's APEC summit in Beijing.

While the silky high-collared tunics were based on the traditional "Mao suits," once beloved by Chinese leaders, social media commentators outside the country joked that they resembled the uniforms worn in the sci-fi TV show "Star Trek." Only days after the leaders donned the national dress for a "family photo" – a tradition of the Asia-Pacific Economic Cooperation gathering – China's agile entrepreneurs and its huge Internet marketplace were already selling replicas online.

"They are very popular, but the customer has to wait 20 days to receive the goods because we need to make them," one retailer selling the tunics for 268 yuan told AFP. One shop took up to 30 orders for the clothes in just half a day, according to the Beijing News, which also noted in its report yesterday that the garments' price had gone up by about 50 percent in 24 hours. "This is definitely going to be a popular item as Big Xi wore it," one retailer told the newspaper, using a commonly used nickname for the barrel-chested Chinese leader.

The APEC custom began in 1993 when former U.S. President Bill Clinton handed out leather bomber jackets to leaders in Seattle, and has seen some unusual fashion choices, including Peruvian ponchos that were compared to potato sacks.