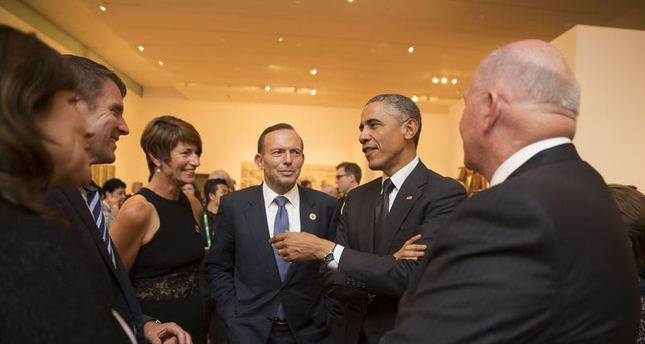 by daily sabah
Nov 16, 2014 12:00 am
Climate change was taken to the fore at the Group of 20 Summit held in Brisbane, Australia. The leaders of the United States and Europe put pressure on other leaders to have climate change discussed at the meetings. Amid Australia's attempts to keep climate change off the G20 agenda, which is of crucial importance for many countries, the issue was recently added to the agenda. The practical measures that countries could take in order to fight against the dreadful consequences of climate change have been included as a passage on the agenda.

"The most difficult discussion was on climate change," an EU official told reporters on condition of anonymity, as Reuters reported. "This was really trench warfare; this was really step by step by step. In the end we have references to most of the things we wanted."

Australian authorities argued that it was not a clear economic issue and so should not be discussed at the meetings. However, the U.S. and European leaders warned Australia of the negative effects of climate change on Australia's territories informing that Australia's iconic Great Barrier Reef, the world's largest coral reef system, was under threat.

"Here in Australia, climate change means longer droughts, and more wildfires. The incredible natural glory of the Great Barrier Reef is being threatened. Worldwide, this past summer was the hottest on record," said the U.S. President Barack Obama speaking at the University of Queensland on Saturday.

During the series of meetings in Brisbane, the U.S. called on world leaders to take global action on climate change. "It will help developing countries break out of this false choice between development and pollution; let them leap-frog some of the dirty industries that powered our development, and go straight to a clean-energy economy that allows them to grow, create jobs, and at the same time reduce their carbon pollution," said U.S. President Obama. He also promised to pledge a U.S. donation of $3 billion to the Green Climate Fund, an organization which helps developing countries limit greenhouse gas emissions.

Deforestation, carbon pollution and methane leaks from oil and gas production have been the central issues inspiring discussions on the effects of climate change. Before the U.N. climate conference takes place in Paris in 2015, world leaders gathered in New York, to participate in the 2014 Climate Change Summit. Food security was also on the agenda of the climate conference, with world leaders pledging commitments to ensure food security through transforming agricultural practices in order to increase productivity while reducing carbon emissions. Amid growing warnings on climate change and its effects, the report "Global Estimates 2014: People displaced by disasters" conducted by the Norwegian Refugee Council's Internal Displacement Monitoring Center (IDMC) shows that 22 million people were internally displaced in 2013 as a result of natural disasters that caused by the climate change.