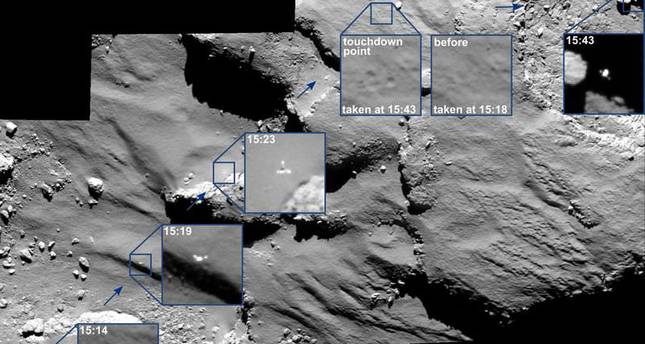 by reuters
Nov 19, 2014 12:00 am
European comet lander Philae 'sniffed' organic molecules containing the carbon element that is the basis of life on Earth before its primary battery ran out and it shut down, German scientists said.

They said it was not yet clear whether they included the complex compounds that make up proteins. One of the key aims of the mission is to discover whether carbon-based compounds, and through them, ultimately, life, were brought to early Earth by comets.

Philae landed on comet 67P/Churyumov-Gerasimenko after a 10-year journey through space aboard the Rosetta spacecraft on a mission to unlock details about how planets, and maybe even life, evolved.

It wrapped up its 57-hour mission on the comet's surface on Saturday after radioing back data from a series of experiments as its battery ran out.

Comets date back to the formation of our solar system and have preserved ancient organic molecules like a time capsule.

The COSAC gas analysing instrument on Philae was able to 'sniff' the atmosphere and detect the first organic molecules after landing, the DLR German Aerospace Center said.

The lander also drilled into the comet's surface in its hunt for organic molecules, although it is unclear as yet whether Philae managed to deliver a sample to COSAC for analysis.

A thermal sensor was supposed to be hammered around 40 cm into the surface but this did not occur, despite the hammer setting being cranked up to its highest level.

The DLR reckons that after passing through a 10-20 cm thick layer of dust, the sensor hit a layer of material estimated to be as hard as ice.

"It's a surprise. We didn't expect such hard ice on the ground," Tilman Spohn, who leads the MUPUS team at the DLR, said in a statement on Tuesday.

Spohn said MUPUS could be used again if enough sunlight gets through to reload Philae's batteries, which the scientists hope may happen as the comet approaches the sun.