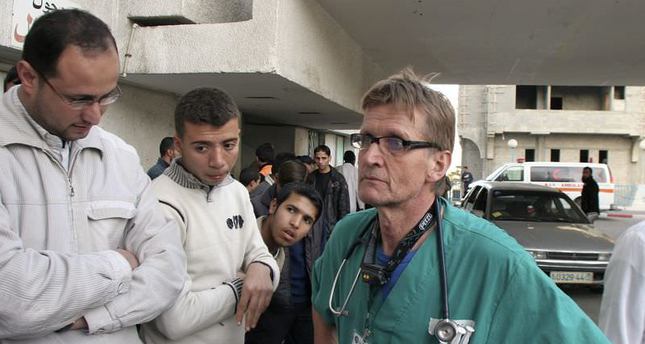 by AA
Nov 23, 2014 12:00 am
A Norwegian doctor allegedly banned for life by Israel from entering Gaza said Friday that he would continue working to help Palestinians.

Mads Gilbert said he was permanently banned from the occupied territory last month and that although he had all the documents required, Israeli police did not allow him to cross into Gaza.

"When I asked the reason why I could not cross the border, Israeli police replied by saying 'security reasons,' " Gilbert said in an interview. "They said they had received instructions from higher authorities on this issue."

Gilbert said he wanted to help people at Al-Shifa Hospital in Gaza. He found the Israeli decision unacceptable, he said.

The doctor gained attention with a public letter he wrote during Israel's attack on Gaza earlier this year.

"Mr. Obama, do you have a heart?" Gilbert asked in the letter. "I invite you to spend one night, just one night, with us at Al-Shifa hospital. I am convinced 100 percent, it would change history. Nobody with a heart and power could ever walk away from a night at Shifa without being determined to end the slaughter of the Palestinian people."

Gilbert said he still hoped to return to Gaza as soon as possible. He said Norwegian authorities were working to help change the decision – and he had learned that the ban might not be for a lifetime, but just until present conditions have changed.
Last Update: Nov 24, 2014 12:02 am