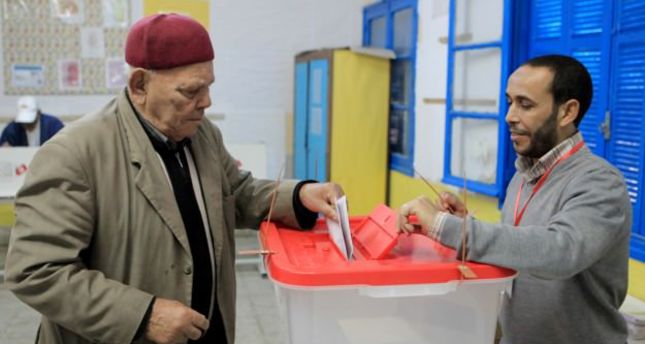 by AA
Nov 23, 2014 12:00 am
Polls opened on Sunday as Tunisians head to cast their ballots to elect a new president in a vote billed as the first free presidential election in the country that sparked the Arab Spring uprisings three years ago.

Twenty-seven presidential candidates are vying for the office in the Sunday vote, the last phase of Tunisia's transitional phase which began in the wake of the ouster of autocrat Zine al-Abidine Ben Ali in early 2011 after massive protests against his 23-year rule.

Polling stations opened across the North African country at 8am (7:00 GMT), and are expected to close at 5pm (16:00 GMT). However, for "security reasons", the polling stations in the western provinces of Jendouba, Kasserine and Kef will be open from 10am to 3pm.

More than five million Tunisians are eligible to cast ballot in the presidential election. Approximately 360,000 registered Tunisian voters living abroad started voting on Friday and will continue to cast their ballots until Sunday in six overseas constituencies, including two in France.

According to figures by the Tunisian electoral commission, most home-based eligible voters are concentrated in capital Tunis and the provinces of Manouba, Ariana and Ben Arous, which have a combined total of some 1.2 million registered voters.

The southeastern Sfax 1 and 2 electoral districts have some 441,000 registered voters, while the eastern Nabeul 1 and 2 districts have around 370,000 voters.

Two presidential candidates appear to be the frontrunners in the polls – interim President Moncef Marzouki, who was voted in office by members of the elected Constituent Assembly a few months after Ben Ali's ouster, and Beji Caid Essebsi, who served as parliament speaker under Ben Ali.

Tunisia's Essebsi vows to 'respect people's will' in polls

Tunisian presidential hopeful Beji Caid Essebsi on Sunday cast his ballot in the country's presidential poll and vowed to respect the election results.

"I am hopeful that the voter turnout will be big. I'm sure Tunisia will continue with its democratic transition," Essebsi told reporters after he cast his ballot in the northern province of Ariana.

He also vowed to "respect the people's will" to be reflected by the election results.

Essebsi's is the leader of the Nidaa Tounes Party, which clinched the most seats by a single party in last month's parliamentary elections, and is considered as a frontrunner in the Sunday vote.

Polls opened at 8am local time (07:00 GMT) as nearly 5.2 million eligible voters are expected to cast their ballots in a vote billed as the first free presidential election in the country that sparked the Arab Spring uprisings three years ago.

Essebsi's is also the leader of Nidaa Tounes Party, which clinched the most seats by a single party in last month's parliamentary polls.

A candidate needs to win the majority of votes (50% + 1) to be declared a winner. Otherwise, the two top candidates will have to go through a runoff, due before the end of December.

In the October 26 parliamentary elections, the turnout hit 69% of registered voters, according to the country's electoral commission.