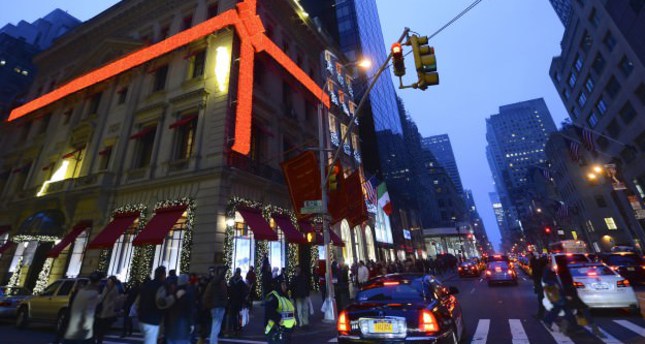 by Nov 28, 2014 12:00 am
Protesters in Ferguson, Missouri began targeting Black Friday sales at major retailers overnight in a new tactic to vent their anger at a grand jury decision not to indict a white police officer who fatally shot an unarmed black teen.

Kicking off their latest strategy inside a Walmart in another nearby suburb of St. Louis, about 75 demonstrators protested peacefully, chanting "Hands up, don't shoot!", bemusing bargain-hunters pushing their brimming shopping carts.

They dispersed peacefully when ordered by a small group of police, moving on to a Target store where they staged a similar demonstration. More protests were planned for Friday.

The grand jury's decision on Monday not to charge Wilson prompted a spasm of fury in Ferguson. About a dozen businesses were torched and more than 100 people were arrested in clashes with riot police that rumbled on into Tuesday night.

But Wednesday and Thursday were far quieter, with no major incidents reported.

Before heading in convoy to Walmart late on Thursday, a group of some 100 demonstrators ate Thanksgiving dinner, sang, prayed and discussed their new strategy in the basement of a St. Louis church.

"We are bruised but not broken," said Cathy Daniels, a woman known to the activists as "Momma Cat" who prepared the food. "We are regrouping. We are not going to take this lying down."

Ferguson, home to about 21,000 people, is a predominantly black city where almost all the political leaders and police are white.

Missouri Governor Jay Nixon, who declared a state of emergency well ahead of the grand jury being announced, has deployed about 2,200 National Guard troops to the Ferguson area to quell violence.

Wilson, who was placed on administrative leave, has said he feared for his life and was acting in self-defense when he shot Brown. Brown's family said he acted with malice and that he should stand trial.