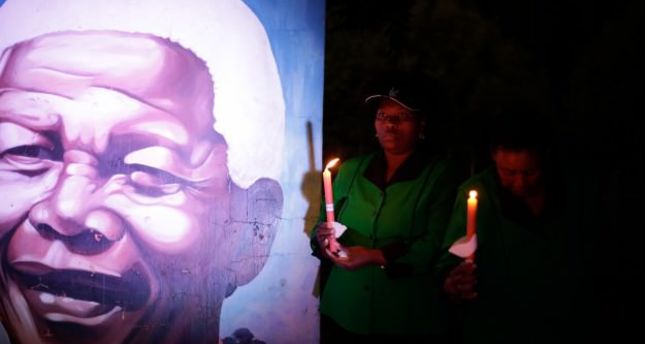 by Daily Sabah Dec 05, 2014 12:00 am
South Africans across the country on Friday commemorated the first death anniversary of former late President Nelson Mandela.

"In all the years that I knew Mandela, I only came across two instances when he was angry," Ahmed Kathrada, a former anti- apartheid stalwart, said in his commemoration speech at the union buildings in Pretoria.

Kathrada, a former friend of Mandela who spent many years with him at Robben Island where they were both imprisoned, described Mandela a simple and courageous man.

"He didn't ask for favors. He did all prison chores," Kathrada recalled.

He said while in prison, Mandela behaved and lived like ordinary prisoners, and also went through hunger strikes staged by fellow inmates.

A large number of activities are lined up for the national event, which aims to bring back to public memory a world-revered icon.

On Friday morning, an interfaith prayer was held at Freedom Park in Pretoria and a wreath-laying ceremony followed at Mandela's Statue at the lawn of the Union Buildings, the official seat of the South African government in Pretoria.

"This is a day to reflect on the momentous life of Comrade Tata Nelson Rolihlahla Mandela, who served South Africa, and all humanity, in a way that no one individual has ever done or is ever likely to in the foreseeable future," the Congress of South African Trade Unions (Cosatu) said in their tribute.

The workers union said Mandela was a humble son of the soil, who grew to be a global icon, a freedom fighter, and a revolutionary cadre, who dedicated his whole life to the fight against tyranny, oppression and racism.

"We will never forget the sacrifice that Madiba(Mandela) did for our country," a middle-aged woman who only identified herself as Lerato, told The Anadolu Agency at the union buildings.

"May his soul rest in peace; he was a great leader," she added.

Mandela, who died last year after a battle with a recurring lung infection, is venerated by South Africans as the father of their nation.

He spent 27 years in jail for taking up arms against South Africa's apartheid regime.

Mandela was released from prison in 1990 to become South Africa's first post-apartheid president in 1994. He spent five years in office.