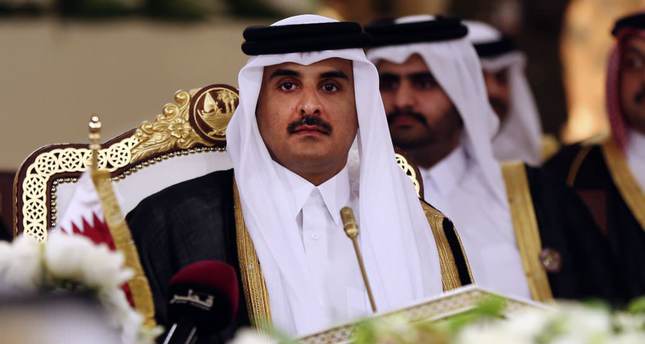 High-ranking Qatari officials declared support for Egypt and President Sisi. Experts said changing policy is a result of the isolation policy applied by other Gulf countries, espicially by Saudi Arabia

Qatar joined the Gulf Cooperation Council (GCC) on Tuesday along with the other five Gulf countries of Saudi Arabia, Kuwait, United Arab Emirates, Bahrain and Oman. The summit was organized to discuss regional issues, especially to increase solidarity among Gulf countries against Iran, Houthis in Yemen and the Islamic State of Iraq and al-Sham (ISIS), which controls large parts of Iraq and Syria. The Gulf countries, which are concerned with Iranian policies of expanding its influence through mobilizing Shiite groups in the Gulf, announced the creation of a joint naval base near Bahrain. Also, the establishment of a joint police force in Abu Dhabi was announced. The force will be used to tackle the "terror" issue and prevent their citizens from joining groups like ISIS or al-Qaida. The GCC was inaugurated in Doha by Qatari Emir Tamim bin Hamad al-Thani, who spoke of the need to address "terrorism." "We have no choice but to face terrorism," he said in his opening statement. "Terrorism prevention is better than trying to cure it after it expands," he added. Referring to the establishment of the joint police force, he said: "It will be an Interpol-like force but inside GCC countries." Kuwaiti Emir Sabah al-Ahmad al-Jaber al-Sabah in the opening ceremony said the presence of different views among the Gulf states is "natural," but that it should not develop into a standoff.

However, the "natural" differences have caused a deep division between Qatar and other Gulf countries on the issue of Egypt. Qatar had backed Egypt's first democratically-elected president, Mohammed Morsi, who was ousted after a bloody military coup, headed by the current president, Abdel-Fattah el-Sissi. Qatar, along with Turkey, had been the only country that opposed the coup and Sissi's rule. At the summit, Qatar reversed its policy on Egypt and pledged support for Sissi. Qatari Foreign Minister Khalid bin Mohammed al-Attiyah said: "We believe that a strong Egypt is in the interest of all Arabs and especially for GCC states. There has never been disagreement between Qatar and Egypt for there to be reconciliation. Egypt is strong and capable and is the backbone of all Arabs." The emir said recent experience had "taught us not to rush to convert disagreement in political viewpoints … into differences that would affect things such as the economy, society, media and others." In a joint statement after the summit, the GCC countries said they all supported Egypt, but did not elaborate.

Saudi Arabia, the UAE and Bahrain had withdrawn their ambassadors from Qatar last March due to Qatari support for Morsi and the Muslim Brotherhood, which was labeled a terrorist group by the three Gulf countries and the military-backed Egyptian government. The three states agreed to return their diplomats last month, seeking to patch up the schism between the Arab world's wealthiest countries that has ramifications across the region, and was a signal for reconciliation among the countries.

Gulf countries have had an isolation policy on Qatar. A researcher at the Foundation for Political, Economic and Social Research (SETA) and a visiting fellow at the German Institute for International and Security Affairs (SWP) Galip Dalay, said Saudi Arabia and its supporters have increased their pressure on Qatar due to various reasons. First, Qatar had been supporting the Muslim Brotherhood by accommodating some of its members in Doha since they would be tried and could receive the death penalty in Egypt if they returned. Secondly, Qatar has been under pressure because of the Doha-based Al-Jazeera TV, some of whose staff are still in prison in Egypt due to their journalistic activities during the coup and the Rabaa Square massacre that left more than 800 dead. Al-Jazeera is one of the few media organizations revealing the human rights violations committed by the military-backed government. Thirdly, Youssuf al-Qaradawi, a prominent Doha-based Islamic scholar, was supported by the Muslim Brotherhood and Morsi, and denounced the Saudi-backed Sissi rule through targeting the king of Saudi Arabia directly. Saudi Arabia's struggles resulted in the release of a warning of arrest for Qaradawi by Interpol. Fourth, oil-rich Qatar, which has entered into business in several economic sectors, attempted to isolate itself from the economic benefits of the Gulf region under the leadership of Saudi Arabia. Fifth, except for Turkey, no other international or local actor in the region, the U.S., Israel and Jordan sided with Morsi or challenged the coup. A tiny country, Qatar was facing a lot of consequences due to its policy on Egypt.

Dalay said: "Qatar has decided to base its policy on realistic parameters, since Qatari officials believe that the status quo will not change in the short-term." He addressed the isolation policy applied by the Gulf countries: "Qatar thought that the policy on Egypt was not sustainable and was harming the country." Another researcher at SETA in Ankara, Can Acun, who also worked in SETA's Cairo branch, said: "Qatar was unable to cope with the growing pressure from the Gulf and its Western allies, so it also recognized Sissi's rule. This changing policy must be read along with its background and the process. It is not an immediate decision." Acun also added: "Qatar has never cut its political relations with Egypt, nor recalled its ambassador or labeled Sissi a 'dictator.' … The change will not lead to the immediate normalization of bilateral relations, and Qatar will not become an ally of Egypt in the short-term." Both Acun and Dalay said that Al-Jazeera, which has played a great role in terms of explaining the police brutality against peaceful pro-Morsi protesters and unfair court decisions, will change and soften its language. Both researchers agreed that there are strong barriers between Egypt and Qatar and it will not be easy to establish trouble-free relations.