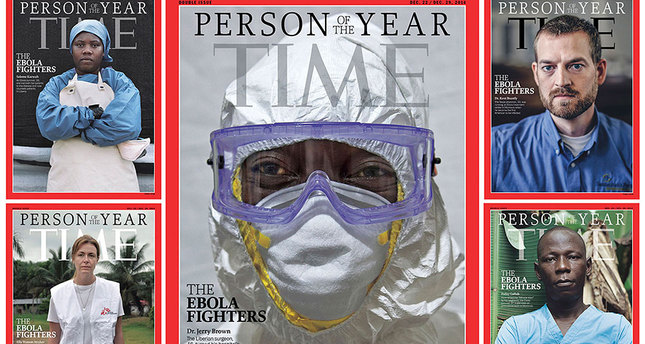 Thousands of medical workers have been fighting to contain the deadliest Ebola outbreak in history, which has killed 6,070 people and infected 17,145 others in suspected or confirmed cases of infection in eight countries as of December 3, according to the World Health Organization.

"The reporting was both heart wrenching and horrifying," Time Africa bureau chief Aryn Baker said. "But every time I wrote about rising death tolls, I wrote about extraordinary men and women who risked everything - from disease to distrust and even death - to stop Ebola from taking more lives."

The European Union and the White House praised Time's decision.

"2014 has been marked by the Ebola epidemic in West Africa and the ripple of fear it sent around the world. But even more remarkable has been the response of doctors, nurses, epidemiologists, paramedics, soldiers and volunteers who flew in from around the world to save lives, putting their own lives at risk every day they go to work," EU Ebola coordinator Christos Stylianides said.

White House press secretary Josh Earnest pointed out the significant progress that USAID, the US Centers for Disease Control and Prevention and the US military have made recruiting and training volunteers, yet called for more health care workers.

"The administration, including the president, could not be prouder of the brave men and women who've committed themselves to this effort in a foreign land," Earnest said.

"But we must not forget that in order to bring this epidemic under control on the front lines, and the only way to prevent additional cases here in the United States, we need more of these medical professionals."

Time magazine annually profiles a person or group that has "for better or for worse done the most to influence the events of the year."

In 2013 Pope Francis was featured as person of the year, and in 2012 it was US President Barack Obama.

The deadliest Ebola outbreak in history has resulted in at least 6,070 deaths so far, with 17,145 suspected or confirmed cases of infection in eight countries as of December 3, according to the World Health Organization.

A timeline of key dates:

December 28, 2013 - A 1-year-old boy dies of a yet unidentified hemorrhagic fever in the village of Meliandou in south-eastern Guinea, near the border to Sierra Leone and Liberia. His sister, mother and grandmother die in January of the same disease, which is later confirmed as Ebola.

March 22, 2014 - Guinea's government confirms an Ebola outbreak that has already killed 59 people. There are concerns the virus may have spread to neighboring Sierra Leone.

March 25 - Ebola is detected in neighboring Liberia, with the first five deaths reported.

March 26 - Guinean authorities prohibit the sale and consumption of wild animals, which are regarded as potential carriers.

May 26 - Sierra Leone closes its borders after five people die.

June 23 - Experts from international medical charity Medecins Sans Frontieres (MSF, Doctors Without Borders) warn the epidemic is "out of control."

July 2 - West African health ministers and experts agree during a summit in Ghana upon a transnational strategy that includes awareness campaigns and a WHO control program in Guinea.

July 21 - The United Nations warns people living in regions affected by Ebola not to consume fruit bats and other wildlife.

July 28 - Liberia closes all borders and exit points to neighboring countries, apart from two airports and three border crossings, where travelers will be tested for the virus.

July 31 - Sierra Leone declares a national emergency. The WHO announces a 100-million-dollar program to fight Ebola.

August 2 - An Ebola-infected American doctor working in Liberia is flown to the US for treatment - the first Ebola patient ever treated in the Western hemisphere. Reportedly close to death, his health improves after being given the experimental drug Zmapp.

August 4 - A Nigerian nurse is infected with the virus and later dies.

The World Bank pledges up to 200 million dollars in aid to Ebola-affected countries.

August 6 - A potentially infected patient, who had traveled to Sierra Leone, dies in Saudi Arabia, according to the Health Ministry. US President Barack Obama promises to assist the fight against Ebola.

August 7 - The Spanish government returns an infected citizen - a priest - to Europe for treatment.

August 8 - The WHO declares West Africa's Ebola epidemic an international health emergency, allowing it to issue rules to combat the epidemic. Nigeria declares a national emergency.

August 12 - The Spanish patient dies in Madrid of Ebola. WHO ratchets the number of Ebola victims past 1,000.

August 21 - Two US missionaries transported home with Ebola are released after a complete cure.

August 24 - For the second time, an infected European - this time a Briton - is flown to his home country for treatment. The Democratic Republic of Congo also reports its first cases, an outbreak separate from the ongoing one in West Africa.

September 3 - WHO says at least 600 million dollars are required to control the epidemic.

September 15 - The African Union says it will send a team of 30 health workers and other specialists to combat the outbreak.

September 16 - The US commits 3,000 troops to aid efforts and plans to train up to 500 health care workers a week and build 17 new clinics for Ebola cases.

September 17 - A French staff member of MSF is infected with Ebola in Liberia and flown to France for treatment.

September 18 - The UN's World Food Program says it has been promised donations of 22 million dollars to provide aid to Ebola-hit West African countries, as agencies warn of looming famine.

September 23 - The US Centers for Disease Control and Prevention says West Africa could see up to 1.4 million cases of Ebola by January 20 unless the international community quickly mobilizes to fight the deadly disease.

September 25 - Ebola infections in Guinea stabilize. Rick Sacra, the third American to be successfully treated for Ebola in the US, is released while the second Spanish citizen airlifted home from West Africa after contracting Ebola dies.

September 26 - Efforts to use experimental Ebola drugs in West Africa are now focused on therapies that use blood from survivors of the virus.

September 30 - A case of Ebola is diagnosed in a patient in the United States for the first time. At least 3,700 children in West Africa have seen one or both parents die because of the Ebola epidemic.

October 1 - The WHO has at least 1,500 experimental Ebola vaccine doses ready to be given to medical staff that are fighting the disease in West Africa.

October 3 - An American freelance cameraman working for NBC News in Liberia is diagnosed with Ebola and transported back to the US for treatment.

October 6 - A nurse in Madrid - who treated a Spanish missionary who died of Ebola in Spain after contracting it in Africa - is the first confirmed case of human-to-human transmission of the disease in Europe.

October 8 - Thomas Eric Duncan, a Liberian man who was the first patient to be diagnosed with Ebola outside of Africa, dies of the disease in a US hospital.

October 13 - A UN employee who contracted Ebola in Liberia dies in Leipzig, Germany, where he had been sent for treatment.

October 14 - The first Ebola patient dies in Leipzig, Germany, a 56-year-old Sudanese UN employee. Somalia quarantines 800 Sierra Leonean peacekeepers, who are about to relieve a previous contingent, after one of the soldiers tests positive for Ebola.

October 16 - Sierra Leone announces the epidemic has reached every district in the country. In Spain, an Air France flight is isolated at Madrid's airport after a Nigerian passenger falls ill.

October 17 - The WHO declares Senegal Ebola free. The WHO admits systemic mistakes in the handling of the early stages of the epidemic in West Africa in a leaked draft document.

October 20 - The WHO declares Nigeria Ebola free, where eight people died from the virus.

October 21 - The WHO announced a vaccine might be available in January, while Silje Lehne Michalsen, a Norwegian national treated in Oslo after being evacuated from Sierra Leone, is released from hospital.

October 22 - Teresa Romero, the nurse who was the first person to be infected outside of West Africa, tests negative for Ebola.

October 24 - Mali reports its first Ebola death, a two-year-old girl who visited Guinea, a day after she became the country's first confirmed case. In the US, the two Dallas nurses who contracted Ebola when treating Thomas Eric Duncan, are declared Ebola free.

October 29 - The WHO says Liberia's infection rate has slowed, partly due to changes in cultural mortuary practices.

November 5 - US President Barack Obama ask Congress to provide 6.2 billion dollars to fight Ebola. The UN reports a surge in cases in Sierra Leone due to lack of treatment centres.

November 7 - MSF announces a significant decline of cases in Liberia, for reasons which are not fully understood.

November 10 - The first test of Ebola vaccine on humans in Germany gets underway. New York City is declared Ebola free after Dr Spencer is declared cured.

November 11 - The UN warns West Africa is on the brink of a major food crisis due to Ebola.

November 12 - Mali records two new Ebola deaths, a nurse and his patient. The cases are unrelated to Mali's only previous Ebola fatality.

November 17 - A doctor evacuated to the US from Sierra Leone dies at the Nebraska Medical Center.

November 18 - An Indian man cured of Ebola is isolated in New Delhi after a semen sample shows positive.

November 22 - The UN expands its Ebola emergency mission to Mali.

November 24 - An Italian doctor, infected in Sierra Leone, is flown to Rome for treatment.

December 2 - The World Bank warns Ebola is crippling the economies of Guinea, Liberia and Sierra Leone and will undermine growth well into next year.

December 8 - The WHO says the fight against malaria is threatened in West Africa following the collapse of health services under the burden of the Ebola outbreak.