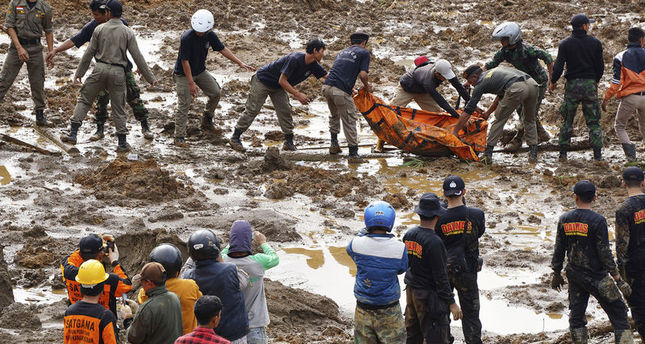 by AA Dec 13, 2014 12:00 am
After several days of heavy rains, a landslide has left at least 11 people dead and 100 missing after burying hundreds of houses in a village on the Indonesian island of Java.

Sutopo Purwo Nugroho, head of information at Indonesia's disaster management agency, told The Anadolu Agency on Saturday that "there are hundreds of people involved in the search" to find those missing in Sampang village in Central Java province.

The landslide occurred at around 06.00 p.m. (11.00 a.m. GMT) Friday, according to Catur Subandrio, chief of Banjarnegara regency's disaster management agency.

National news agency Antara quoted him as saying, "Many houses collapsed to the ground. Most [people] could save themselves, but others have not yet been known."

Joint teams including agency crews, soldiers, police and volunteers continue searching for victims with the use of heavy equipment.

Eko Budi Rahardjo, secretary for Banjarnegara's public relations office, said residents had been evacuated from two villages near a river whose flow had been interrupted by the landslide.

Those evacuated include more than 200 people from Karangkobar District and 220 others from Wanayasa District.

Banjarnegara has experienced a series of landslides since heavy downpour began Wednesday afternoon.

The rainy season in Indonesia began in late October, with the islands of Java and Sumatra expected to face threats of flooding and landslides in December amid peak rainfall.

Landslides have caused over 270 deaths this year, more than any other natural disaster in Indonesia.