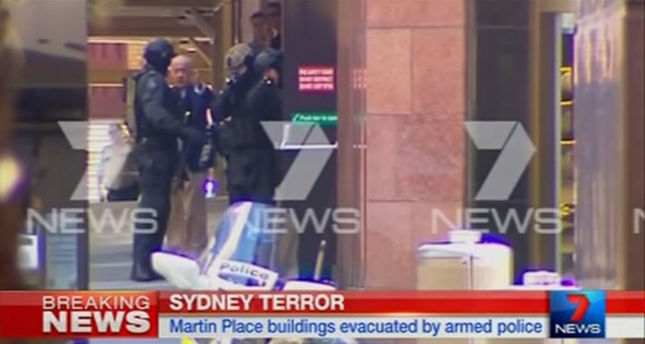 Two hostages were reported dead while seven others were injured in the hostage crisis carried by self-styled "Sheik" Man Haron Monis, who was charged over 40 crimes, including sexual assault

Self-styled "Sheik" Man Haron Monis entered a café, reportedly with a gun and bag, in Sydney early Monday morning while there were around 10 employees and 30 customers inside. The area was evacuated after the man took the people inside hostage and negotiations began. After six hours, three hostages appeared running from the café. Two more people also fled after an hour.

The crisis ended after 16 hours as Australian commandos and Sydney Police stormed the café, two hostages and the gunman were reported dead while seven others were injured, including three heavily wounded.

Monis, a 50 year-old who self-sytled himself as a "Sheik", was earlier charged over 40 crimes, including sexual assault.

Two dead hostages were described as a 34 year-old man and a 38 year-old woman by the police, whom died after being taken to hospital along with Monis.

It still remains unclear whether the people fled or were released by Monis. New South Wales Police Deputy Commissioner Catherine Burn said: "Those people are now being assessed to make sure their health is okay and then police will talk to them. … Our approach is to resolve this peacefully. It might take a bit of time but that is our priority."

The police refused to answer questions of how many people were inside and what the gunman had demanded. "I would like to give you as much as I can but right now that is as much as I can. First and foremost, we have to make sure we do nothing that could in any way jeopardize those still in the building," New South Wales State Police Commissioner Andrew Scipione said.

Police were negotiating with the gunman and said they had no information to suggest anyone had been hurt. Scipione said they had not confirmed whether the hostage situation was related to terrorism, although many Australian media outlets related the incident to terrorism directly. "Our only goal tonight and for as long as this takes, is to get those people that are currently caught in that building out of there safely," he said.

Channel 10 news said it received a video in which a hostage inside the cafe had relayed the gunman's demands. The station said police requested they not broadcast it, and Scipione separately asked all media outlets that might be contacted by the gunman to urge him instead to talk to police.

Reporter Chris Reason said the man carried what appeared to be a pump-action shotgun, was unshaven and wearing a white shirt and a black cap. Earlier in the day, network staff counted about 15 different faces among hostages forced up against the windows. "The gunman seems to be sort of rotating these people through these positions on the windows with their hands and faces up against the glass," Reason said in a report from his vantage point.

"One woman we've counted was there for at least two hours – an extraordinary, agonizing time for her surely having to stand on her feet for that long. … When we saw that rush of escapees, we could see from up here in this vantage point the gunman got extremely agitated as he realized those five had got out. He started screaming orders at the people, the hostages who remain behind." Reason later reported that staff brought plates of food from a kitchen at the rear of the cafe and the hostages were fed.

Television footage showed that the man forced some of the hostages to raise a black flag on which "There is no God but God and Muhammad is his messenger" was written.

At the beginning, some media outlets reported that it was the flag used by the Islamic State of Iraq and al-Sham (ISIS). However, an ISIS expert, Aaron Stein, said in his twitter account that it was not the same flag, but the testament of faith, or "shahadah," to become Muslim, also a part of the call to prayer that is recited to call Muslims to pray five times a day. Australian Prime Minister Tony Abbot said: "This is a very disturbing incident. It is profoundly shocking that innocent people should be held hostage by an armed person claiming political motivation."

The Sydney Morning Herald published an editorial saying that the country must "remain calm, retain perspective and embrace all sections of the community to ensure we can all go about our everyday lives free of fear." The editorial started by saying: "The hostage situation in the Lindt cafe in Martin Place [in Sydney's Central Business District] has tested Australians as individuals, and Australia as a civil and democratic society."

"We are having to face many tests, each of which challenges who we are, how we respond to criminal dangers in our midst and, most confronting, what sort of nation we want to be." Sydney churches, synagogues and mosques made a call to people to gather at night for prayer. Muslim leaders in Australia called for peaceful resolution to the hostage situation.

The Grand Mufti of Australia Ibrahim Abu Mohamed said he and the Muslim community condemned "this criminal act unequivocally." Muslim leaders in the country have been making calls for preventing the increase of tension in the country since September as Australia joined the U.S.-led anti-ISIS coalition and passed an anti-terrorism bill.