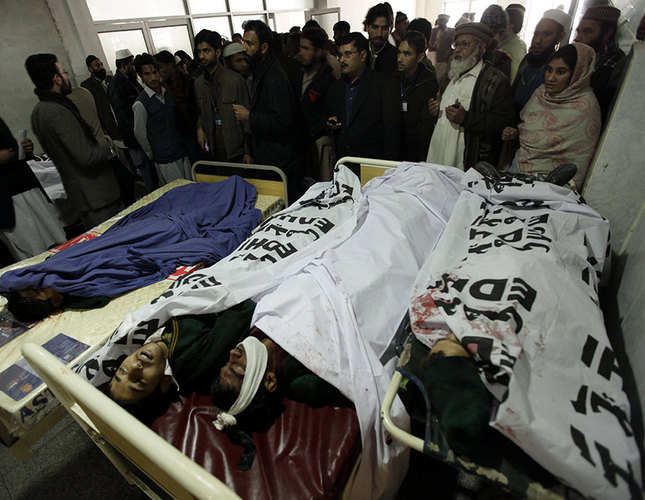 by Anadolu Agency Dec 16, 2014 12:00 am
More than 140 people, the vast majority children, were killed at a military-run school in north-western Pakistan Tuesday in an attack by militants, local authorities said.

At least 141 people, including more than 132 children, died before army commandos killed all the attackers and regained control of the building, said Pervaiz Khattak, chief minister of Khyber-Pakhtunkhwa province.

The army raised from six to seven the number of Taliban attackers it believed had held hundreds of students and teachers hostage at the Army Public School in the north-western city of Peshawar. They were killed in a five-hour long operation.

At least one the assailants detonated a suicide vest, the military said.

The Taliban had said six of their fighters were involved in the attack.

Television pictures showed relatives being held outside a security cordon around the school as the area was sealed off.

At one point, police estimated that at least 500 students were being kept inside an auditorium.

There was "intense gun fighting" as Pakistani troops battled the assailants, Khattak said.

Witnesses heard around a dozen loud explosions and saw heavy smoke at the school. Helicopters were flying overhead.

The Pakistani Taliban claimed responsibility for the raid, saying it was revenge for a military offensive against militants in the north-western tribal region.

Pakistani Prime Minister Nawaz Sharif announced three days of mourning for the victims of the massacre.

"I feel that, until and unless this country is cleansed from terrorism, this war and effort will not stop, no one should be doubtful of this." Sharif said.

The international community were quick to express sympathy with Pakistan's suffering.

The prime minister of Pakistan's regional rival, India, Narendra Modi, condemned the "cowardly terrorist attack," saying: "It is a senseless act of unspeakable brutality that has claimed lives of the most innocent of human beings - young children in their school."

US President Barack Obama condemned in the strongest terms the "horrific" attack on the army-run school in Peshawar.

"By targeting students and teachers in this heinous attack, terrorists have once again shown their depravity," read a White House statement.

"Killing innocent children is a completely anti-Islamic and inhumane act, and I condemn this barbaric attack in the strongest terms," Ghani was quoted as saying in a statement.

Condemnation also poured in from the United Nations and the European Union.

"No cause can justify such brutality, no grievance can excuse such horror," Ban says.

"Getting an education is every child's right. Going to school should not have to be an act of bravery."