US and Cuba to restore ties, put Russia out of action 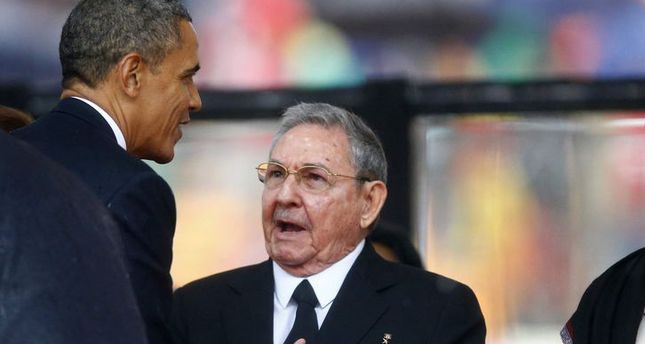 The U.S. and Cuba agreed to restore diplomatic ties in a move to isolate Russia through eliminating its influence in Latin America

The U.S. and its Cold War adversary, Cuba, agreed on Wednesday to normalize relations that have been severed for the last 50 years. The U.S.'s latest motive for re-establishing ties with Havana is considered an attempt to deteriorate Russia's relations with its longtime partner, Cuba and its allies in Latin America like Venezuela and Nicaragua. It is important to note that the U.S. move comes immediately after Russia was hard-hit by international sanctions and a falling ruble.

Both the U.S. and Russia extend pressure on Cuba through forming alliances or reviving diplomatic relations. Cuba is of strategic importance for both Russia and the U.S. at a time Russia-U.S. relations have severely worsened over Russia's expansionist policies in Ukraine and the larger region.

To what extent Moscow's alliance with the communist-run island will be affected from renewed U.S.-Cuba relations are of crucial concern. In an effort to further deteriorate the Russian economy, Obama is expected to sign the Ukraine Freedom Support Act, a congressional bill to impose new sanctions on Russia.

As the EU and U.S. prepare to impose a new round of sanctions, the Russian economy is facing hard times, hit hard by current sanctions due to the Russian annexation of Crimea and its continued support for separatists in the conflict-hit regions in eastern Ukraine as well as falling oil prices. In an effort to impose stronger measures against Russia in order to disrupt the Russian economy as a whole, some large Russian enterprises close to Putin such as Novatek, Gazprombank and many others have already been the main targets for both EU and U.S. sanctions.

"We will begin to normalize relations between our two countries. Through these changes, we intend to create more opportunities for the American and Cuban people, and begin a new chapter among the nations of the Americas," Obama said on Wednesday in a statement on the Obama administration's policy changes on Cuba.

The change in policy includes the opening of embassies in each other's countries within the coming months, a breakthrough prisoner exchange and easing of restrictions on commerce. Obama said that Havana's release of American Alan Gross, 65, who had been imprisoned in Cuba for five years, was an initial factor to start talks.

"Alan [Gross] was released by the Cuban government on humanitarian grounds. Separately, in exchange for the three Cuban agents, Cuba today released one of the most important intelligence agents that the United States has ever had in Cuba, and who has been imprisoned for nearly two decades," Obama said. After the release of Gross along with an American intelligence agent held in Cuba for 20 years, the U.S. freed three Cuban spies as part of the prisoner exchange.

After the 1959 revolution that brought former president, Fidel Castro to power, ties between the two countries severely deteriorated. Washington broke diplomatic relations with Havana in 1961 as Cuba started to build close relations with the Soviet Union. Hostilities increased with the Cuban missile crisis in October 1962 that triggered a crisis between the Soviet Union and the U.S. Since then, the U.S. has imposed harsh restrictions on Cuba up until Obama was elected president in 2008. During the Obama administrations, the two countries began to cooperate and improve diplomatic relations.