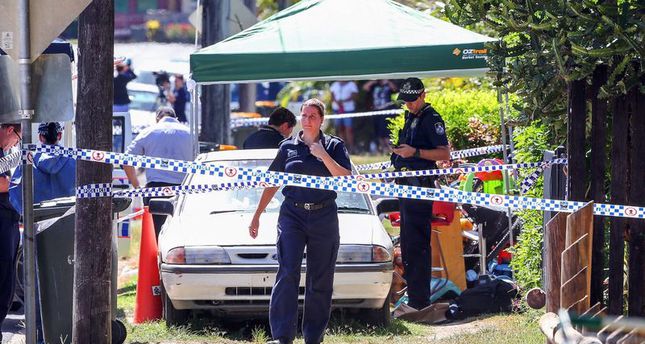 The mother of eight children was arrested for the killings children on Saturday, according to Anadolu Agency.

Eight children ranging from babies to teenagers were found dead at a home in the Australian city of Cairns Friday, police said, reportedly in a gruesome mass stabbing that comes just days after a deadly siege in Sydney.

Prime Minister Tony Abbott called the Cairns tragedy heartbreaking, coming with Australia already in an outpouring of national grief over Monday's dramatic standoff in Sydney, which left two hostages and the gunman dead.

"All parents would feel a gut-wrenching sadness at what has happened," he said in a statement. "This is an unspeakable crime."

Cairns police said they were called to the scene in the northern city and found the bodies of the children, aged between 18 months and 15 years.

A woman in her 30s was injured in the incident in the suburb of Manoora, 10 minutes from the city centre. TV footage showed her being stretchered into an ambulance.

Police said she was in a stable condition in hospital and assisting detectives with their inquiries, but was not in custody.

Cairns is a tropical city with a population of more than 150,000 people and is popular with international tourists as a gateway to the Great Barrier Reef, one of Australia's biggest tourist sites.

Only a day earlier, a Melbourne man was jailed for life for smothering to death his two daughters, aged three and four, in a move the judge said was aimed at punishing his ex-wife.

In the latest tragedy, the Australian Associated Press cited the injured woman's cousin, Lisa Thaiday, as saying the children were all siblings and the woman was their mother, although this was unconfirmed.

She said a 20-year-old man arrived home to find his siblings dead inside the house.

"I just can't believe it. We just found out (about) those poor babies," Thaiday said.

Reports widely said the children had been stabbed while the Cairns Post reported they were also suffocated, although police did not immediately confirm this.

Sky News, whose news anchor broke down in tears as the drama unfolded, said a stepfather was known to live at the house, but his whereabouts were unknown.

Who killed the children remains unclear but Cairns Detective Inspector Bruno Asnicar said there was no need for the public to be worried, suggesting no one was on the loose.

"As it stands there's no need for the public to be concerned about this other than the fact that this is a tragic, tragic event," he told a media conference.

"The situation is well controlled at the moment. There shouldn't be any concern for anyone else out of this environment."

He added that it was too early to determine the chain of events.

"We need to do a lot more work as you can imagine," he said.

"The crime scene is being locked down and that includes from me. Nobody goes in there until our forensic people have finished and until we have done that we're not going to be able to clearly establish any relationships."

Cairns Post reporter Scott Forbes, who is on the scene, said the area where the bodies were found has a large indigenous population.

"All of the people here are actually related to the people who were involved in this incident," he told the Australian Broadcasting Corporation of those who live on the same street.

"So they're all reeling at the moment. But telling us that she was a very, very protective, very proud mother who loved her children dearly."

Local resident Rebecca Levers tweeted: "Horrible to come out of our house and hear this, that children are involved. Devastating."

A couple who live around the corner said they did not feel safe in the area and it was not uncommon to hear fighting and drinking at night.

"It's pretty scary. Oh my God," the man, who did not want to be named, told reporters.