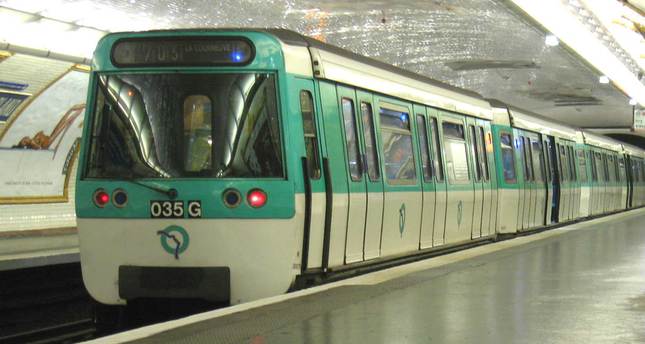 I was sitting in the last car of the Paris metro, in one of the folding seats close to door. A number of other people were in the car, as well, though it wasn't packed.

Two stations before my stop, a large man strode into the car. He was about 6-foot-three (1.90 meters), and he had a big belly and long brown hair. He was unshaven.

He stared at me.

As a Muslim woman wearing the scarf, walking in the streets and taking public transportation in Paris means I often face people's stares. Sometimes I hear comments and whispers. I am a young reporter, just recently assigned to Paris, but I have quickly gotten used to it.

Still, I was unprepared for what happened next.

Then there was silence. No one spoke a word. I was terrified.

Without thinking, I took my bags and went to stand in another part of the car. I could hear the beating of my heart. And I was trembling -- not just out of fear, but out of anger that I was not able to respond in any way.

I am a small woman. The man was huge. And from the way he approached me, I felt certain that, had I answered back, I would not be writing these lines today.

I took out my mobile and called a friend to try to calm down. The man continued to fix me with a threatening stare.

The train rattled on. The minutes felt like hours.

But finally my stop came. I rushed out, turned, and used my phone to take the man's picture.

He quickly covered his face, then flashed me the finger and started screaming.

Somehow my courage returned. I found my voice again.

"Rot in hell, you racist," I shouted.

Then he tried to grab me. I jumped back and, thankfully, the doors of the carriage closed, with him inside and me out.

I burst into tears.

This was no isolated incident. In France, 691 Islamophobic acts were recorded in 2013 by the French human rights watchdog Collective Against Islamophobia. And 640 of those acts targeted individuals rather than institutions.

The overall increase from the previous year was a startling 47 percent. Things are getting worse, not better.

The human rights group said 2013 was marked by increase in violent acts, and the assaults became more physical.

"During just the last eight months of 2013, 27 physical attacks were recorded," the group reported.

When I calmed down and had time to reflect, I realized that the scariest part of what happened to me not the behavior of the man in the metro.

It was the silence of the others. They watched wordlessly as he insulted me, harassed me and threatened me.

But on this dark day, a ray of light shone through. While I wept and shook as the train pulled away, an elderly French woman approached me. She held my hand.

"Don't cry my dear, don't cry," she said. "He is just sick. He is sexist. You are a woman and above all Muslim. He is jealous. Be strong and don't cry."

And that is what I am going to do - be strong. I will hold my head high. For I know that, despite it all, wonderful adventures still await me here in the city of lights.
Last Update: Dec 21, 2014 10:22 am
RELATED TOPICS