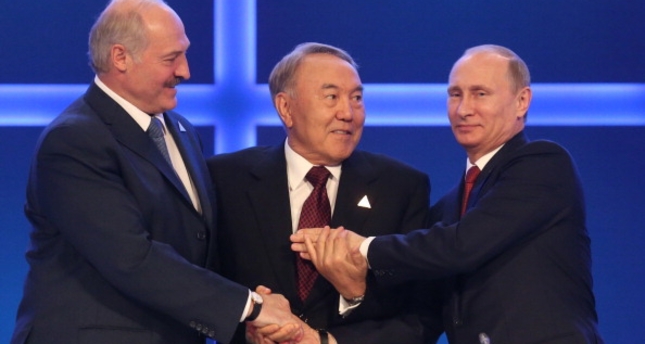 Amid growing pressure from NATO and the EU, the Russian-led Eurasian Economic Union (EEU) entered into force through building an economic bloc of former-Soviet states that Russia plans to enlarge

Russia is planning further cooperation with former-Soviet countries as the Eurasian Economic Union (EEU) strengthens Russia's sphere of influence in the face of sanctions from the European Union and the West. The founding treaty of the EEU, which was signed by three member states; Russia, Belarus and Kazakhstan, came into force on Jan. 1. Armenia's accession treaty comes into force today, Jan. 2. Kyrgyzstan is expected to join the union by the end of 2015. Russia, Belarus and Kazakhstan, former states of the EEU, formed a customs union in order to build an economic and commercial alliance that guarantees the circulation of goods and services between the three EEU member states. The first custom measures were signed between Russia and Belarus. However, the actual extent to which enlargement of the union will benefit new member states is of crucial importance for the future economic and political aspects of the Eurasian pact.

Putin's Russia considers the EEU a powerful alliance that can rival the European Union. The union would lead to the revival of the "glorious" times of the Soviet Union through centralizing the union under the presidency of Moscow, like the institutionalization of the EU in Brussels.

In the face of tightened economic sanctions from the West, Russia is now looking for greater cooperation with ex-Soviet countries in an effort to strengthen energy, defense and strategic ties in northern Eurasian countries, in a bid to revive Russia's economy that was badly hit by U.S. and EU sanctions over its expansionist policies in the break-away territories in former Soviet states like eastern Ukraine. "In any case, it would be politically short-sighted of the European Union to ignore the new Eurasian reality," Russia's Deputy Foreign Minister Vasily Nebenzya said.

Armenia's vital alliance with Russia would be strengthened by accession into the Eurasian Economic Union. Armenia would be expected to become more dependent on Russia in commercial and political matters. Since the dissolution of the Soviet Union, Russia has maintained its influence over Armenia through the energy, infrastructure, and transportation sectors. Armenia purchases Russian gas at a 50 percent discount, which has helped build up bilateral ties with Russia.

Despite Belarus bordering the European Union, it is also one of members of the Eurasian Union. As its bilateral relations with Moscow intensify, the former Soviet country also want to "normalize relations with the West, but not to the prejudice of Russia," as reported by Russian state-run news agency Itar-Tass. "The West accounts for half of our trade. If the West extends a hand of cooperation, we should take advantage of that," Belarusian President Alexander Lukashenko, the authoritarian leader once dubbed "Europe's last dictator" by the West, said in a statement, while stressing the importance of a continuing relationship with Russia.

Kazakhstan, rich in natural resources and the world's main supplier of uranium, is the central point of both Russia and Europe, mainly France. Kazakhstan gives the utmost importance to a free trade deal with Russia as part of the Customs Union between the three states due to its geopolitical location. Located in the very heart of the Eurasian continent, the country has no access to the sea, thus the movement of goods and services is somewhat restricted. "Our aim is purely pragmatic, since Russia is our main partner and we share a common border of more than 7,500 kilometers," Kazakh President Nursultan Nazarbayev said in a statement. The ex-Soviet country still continues to strengthen its commercial ties with France, the country's fifth-largest trade partner.

Despite their Western-leaning ways, Russia has put greater pressure on these three ex-Soviet countries. Yet, these three countries have attempted to strengthen their political and economic ties with Europe instead of Russia. Moscow has sought to expand its sphere of influence through backing and financing secessionist movements in break-away regions like the Donbass region in Ukraine, Abkhazia in Georgia and Transnistria in Moldova. Moscow's aim is to strengthen its military presence through deploying its military in the regions in order to keep these break-away regions under its control. A new integration treaty was signed between Russia and Abkhazia, in an effort to improve mutual cooperation, thus deepen ties between the separatist enclave and the Moscow government in defiance of the pro-Western Georgian government. Meanwhile, Georgia has developed ties with the Kiev government through providing humanitarian and political support to Ukraine. The Transnistria region in Moldova has demanded the holding of a referendum to join Russia, which the Moldovan government denies.