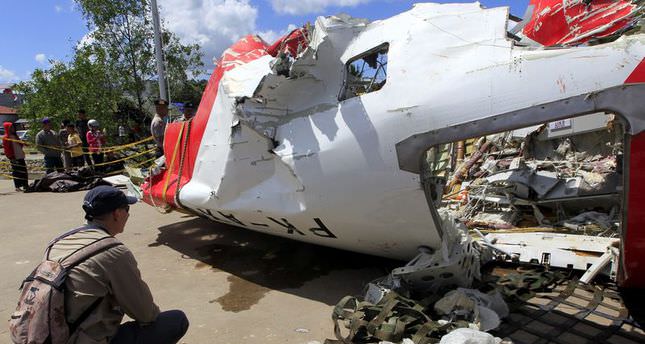 The AirAsia airliner that crashed two weeks ago in Indonesia likely "experienced an explosion" before hitting the water due to a significant change in air pressure, a senior government official said on Monday.

"My analysis is, based on the wreckage found and other findings, the plane experienced an explosion before it hit the water," Supriyadi, operations coordinator at the National Search and Rescue Agency, told reporters.

He said the left side of the plane seemed to have disintegrated, pointing to a change in pressure that could have caused an explosion.

Search teams have retrieved one of the components of the plane's black box, Indonesia's National Search and Rescue agency confirmed. The head of the agency, Bambang Sulistyo, told a press conference, "We have received an official report from the National Transportation Safety Committee that search teams have found one component of the black box known as flight data recorder at 07.11 a.m."

Explaining that the serial number matched that of the black box of flight QZ8501, he added, "Now we'll focus on finding the cockpit voice recorder, alongside the main mission of searching for victims believed to be trapped in the [plane's] main body."

Flight QZ8501 lost contact with air traffic control with 155 passengers and 7 crew on board during bad weather December 28 while flying from the Indonesian city of Surabaya to Singapore.

While 48 bodies have been recovered to date, searchers expect the plane's fuselage to contain more.