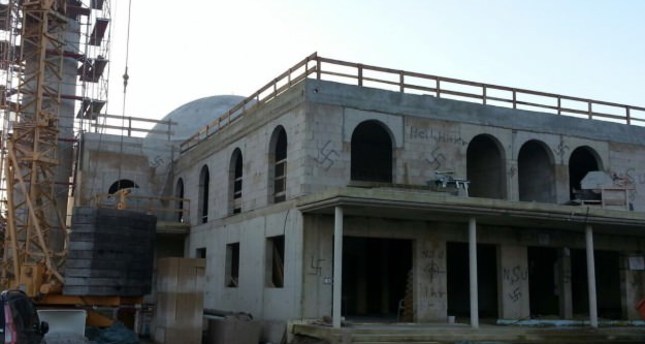 by Anadolu Agency Jan 12, 2015 12:00 am
Neo-Nazis carried out another attack on the Turkish-Islamic Union for Religious Affairs' Suleymaniye Mosque in the German city of Dormagen in Northern Rhine-Westphalia state early on Sunday morning.

The incident was the second attack in three weeks on the same mosque.

Swastika signs and some Islamophobic writings were made on the walls of the mosque, including phrases that said, "Germany belongs to Germans." Abusive words were also used that said Muslim culture didn't belong in Germany.

Turkey's Consul-General to Dusseldorf Alattin Temur visited the mosque complex after the attack and condemned the incident.

Condemning the racist and Islamophobic attack on the mosque, chairperson of the Turkish-Islamic Union for Religious Affairs Prof. Dr. Nevzat Yasar Aşıkoğlu said the first attack on the mosque took place on December 20, 2014 and authorities were asked to take necessary steps to provide protection for the place of worship.

"However, this is really sad that an attack took place for the second time," Asikoglu said.

In a statement, the union also said that such kinds of attacks created worry and fear among the Muslim community in Germany.

German police said they were launching an investigation into the incident.

According to a new study, Germans had become more intolerant of Islam in recent years and some also held prejudices against Muslim immigrants in the country.

A total of 57 percent German non-Muslims said in November 2014 that they perceived Islam as a threat, a rise of four percent since 2012, according to a representative poll conducted for the Bertelsmann Foundation.

The Turkish Islamic Union will post a symbolic guard outside Germany's media institutions on January 16 in the aftermath of a deadly attack in Paris on a French satirical magazine, Charlie Hebdo.

The guards will be posted after Friday prayers.

Germany's Muslim community will also support the protest named, "respect for our religion, but support for freedom of press."

Asikoglu said the terrorist attacks in Paris were deeply upsetting.

"We want to react to recent terrorist attacks and also want to show our disapproval of the incidents," he said.