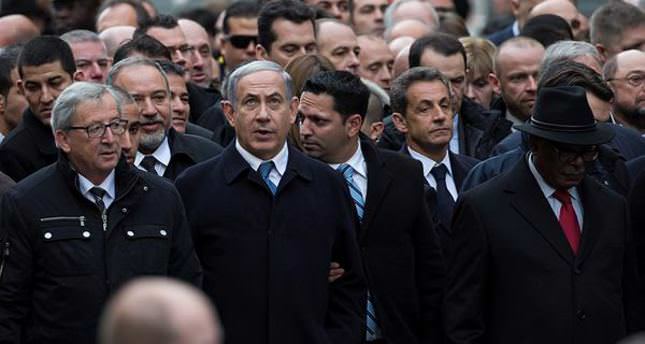 by Daily Sabah with Agencies Jan 12, 2015 12:00 am
Israel-based daily Haaretz newspaper claimed that the French President had asked the Israeli Prime Minister not to attend the anti-terrorism rally that was held on Sunday to show solidarity against terrorism by French people along with senior politicians from all over the world.

According to Haaretz, Hollande's National Security Adviser Jacques Audibert explained that French president wanted the event to focus on demonstrating solidarity with France, and to avoid anything liable to divert attention to other controversial issues, like Jewish-Muslim relations or the Israeli-Palestinian conflict. Audibert said that Hollande hoped that Netanyahu would understand the difficulties his arrival might pose and would announce that he would not be attending.

According to the paper, the Israeli premier acquiesced to the French request, but changed his mind later after learning that Israeli Foreign Minister Avigdor Lieberman and Economy Minister Naftali Bennett had intended to travel to Paris.

"When Cohen informed Audibert that Netanyahu would be attending the event after all, Audibert angrily told Cohen that the prime minister's conduct would have an adverse effect on ties between the two countries as long as Hollande was president of France and Netanyahu was prime minister of Israel," Haaretz quoted the source as saying.

The French presidency had to invite Palestinian President Mahmoud Abbas although the latter announced that he would not be traveling to Paris, the report said. According to Haaretz, Hollande was so angry at Netanyahu that it was obvious during a ceremony held Sunday evening following the march at the Grand Synagogue in Paris.

"Hollande sat through most of the ceremony, but when Netanyahu's turn at the podium arrived, the French president got up from his seat and made an early exit," the Israeli paper said.

Both the Israeli and French authorities have yet to comment on Haaretz's assertions. Chief Palestinian negotiator Saeb Erekat, for his part, said that Hollande had "contacted Abbas and asked him to attend the anti-terrorism march." Ynetnews reported that French president was frustrated when he learnt the Israeli envoy would include the prime minister, two senior ministers and an MK.

Netanyahu was also criticized by the Israeli opposition parties as his trip to France cost $177.000. Thousands of twitter users also criticized his attendance by referring to the Israeli crimes in Palestine, especially the attacks on Gaza last summer that left more than 2,000 deaths.

However, both the Israeli and French authorities have yet to comment on Haaretz's assertions.

Twelve people were killed on Wednesday in an attack by masked gunmen at the Paris headquarters of Charlie Hebdo, a satirical magazine known for printing offensive material, including cartoons of Prophet Muhammad in 2006 and 2012. The two suspects, brothers Said and Cherif Kouachi, were killed on Friday in a warehouse in Dammartin-en-Goele, a small town north of Paris. On the same day, four hostages and a gunman, said to be linked to the Kouachi brothers, were killed inside a kosher supermarket in Paris.

In response, Hollande called on world leaders and government to join the people of France in condemning the attacks by participating in Sunday's anti-terrorism march.

More than 55 world leaders marched in Paris Sunday with hundreds of thousands of people in a symbolic unity march to pay tribute to victims of the recent deadly attacks that killed a total of 17 people in France.