Spain's plan to prevent radicalism may hurt its Muslim population 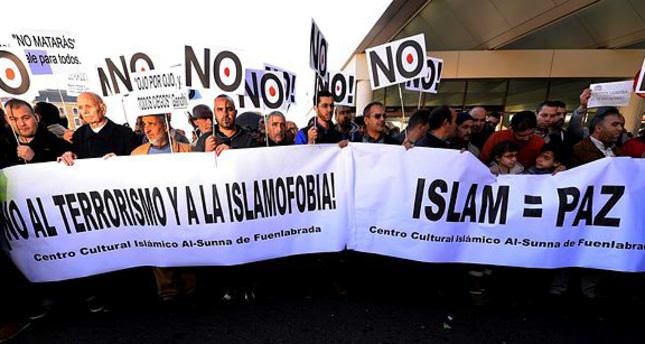 by Daily Sabah Jan 12, 2015 12:00 am
The Spanish government has introduced a draft bill, purportedly as a measure to hinder violence in the wake of the deadly attacks in Paris, according to Doğan News Agency.

The plan, which envisages detecting both radical Muslims and their liability towards radicalism via the assistance of the collaborative efforts of society, has reportedly inflamed heated debates since it became public.

Twelve people were killed on Wednesday at the satirical magazine Charlie Hebdo, marking the beginning of a three-day terrorist spree as the result of which eight more were killed. The attacks, which have rocked the country for the past week, were apparently launched by radical Islamists and may have unsettling consequences for the Muslim community residing in Europe. Countries in the region, which are already suffering from increasing Islamophobia, are looking to implement offensive precautions to prevent potential violence from 'radical Muslims'. Spain is allegedly among the countries.

If the plan is put into effect, members of society will notify the authorities if they confront any incident that raises suspicions of radicalism in Islam. Teachers and doctors will reportedly be tasked as 'detector' to spot any inclination of radicalism in Muslim students or patients.

Spotting and reporting so called fanatic Muslims is feared to morph into a witch hunt that might result in unrest among the entire society, roughly one and a half million of which is Muslim.

The officials reportedly explained the basis of the preventive plan as a measure to hamper 'Jihadists youth' growing in society.

Francisco Martínez, Spain's state security secretary, refrained from offering more details about the draft bill and only stated that preventing such attacks before they happen remains top priority.

Highlighting that the plan aims to step up corporation in civil society and coordination between the institutions, Martinez reportedly said "the people who have potential to participate in a radical offense will be detected and thereby prevented."

The regulation will reportedly initially be put in force in the neighborhoods where dominantly Muslims reside. There will be a special official appointed to take care of the neighborhood under the plan's scope and monitor the young Muslims. Teachers and doctors in the region will also be authorized to follow the task.

Meanwhile, reports of attacks on mosques and Muslim-run businesses in various places in France have led many French Muslims to fear rising Islamophobia. French media reported revenge attacks on Muslims in the aftermath of the Paris massacre, and many Muslims have become the target of renewed attacks on religious places that belong to the Muslim community.

France has the largest Muslim population in Europe with an estimated population of over eight million.