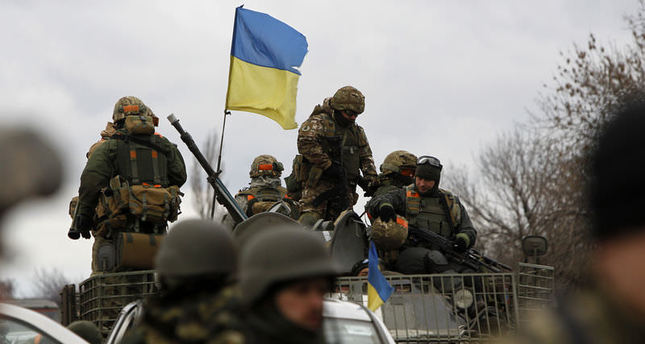 by AA Jan 13, 2015 12:00 am
The Ukrainian armed forces are receiving funds, equipment and training in preparation for eventual NATO membership, Ukraine's ambassador to Turkey told The Anadolu Agency on Monday.

"Ukraine is not ready to join NATO," Sergei Korsunsky said. "The cost of NATO membership is high, and a NATO member must be prepared to deploy forces on NATO missions around the world. Ukraine cannot manage either of these requirements yet."

But as Ukraine builds its armed forces to meet the challenge of the Russian incursions on its territory, it is also working with NATO on training and equipment, and funds are being made available by NATO to aid Ukraine in its build-up, Korsunsky said.

"When the preparation is complete, and the funds are there, then Ukraine will take steps to discuss NATO membership, and make a decision," he said.

In the meantime, the work of building armed forces to a level at which they can maintain the country's security continues.

"When we were attacked, we had practically no armed forces," Korsunsky said. We certainly expected no need to defend ourselves from Western Europe, and we didn't anticipate ever being attacked by Russia. We have had to create our army and navy almost from scratch."

Ukrainian Defense Minister Stepan Poltorak said the country planned to increase the strength of army personnel from 232,000 to 250,000 people, as well as to create six mechanized brigades, a mountain infantry regiment, three artillery brigades and two army aviation brigades, according to an inteview with Interfax on January 5.

Korsunsky said Ukrainian defense experts had been working with the Turkish armed forces to learn more about NATO techniques, as Turkey is a longstanding member of NATO.

"We do need multilateral defense -- no country can stand against Russia by itself," he said.

Ukraine is receiving a $17 billion bailout from the International Monetary Fund, but that is likely to prove insufficient, Korsunsky said. The conflict with Russia has devastated the country's economy. An important part of the steel industry, for example, was based in the eastern province of Donetsk, which is now in the hands of pro-Russian separatists.

"That accounted for 25 percent of our exports," Korsunsky said.

Korsunsky predicted that change would come to Russian politics, and Russian policy on Ukraine would change, as well.

"We are taking steps to build international pressure on Putin," he said.

Two cases have been filed with the European Court of Human Rights against Russia this year, he said.

Ukraine filed a claim seeking compensation for Russia's annexation of Crimea, which the government has assessed at $100 billion. The second case involves crimes allegedly committed by Russia in its incursions into Ukrainian territory.

In November, Russia was invited by the court to submit its observations on these lawsuits, and action is expected in 2015.

Cases that involve two sovereign states are rare, so the court's ruling will involve considerable deliberation, a lawyer who pleads at the court told AA. A ruling may not be made for several years.

"But we fully expect a ruling in our favor, and when that happens, there will be further international pressure on Russia to change its policies -- perhaps even internal political change," Korsunksy said.