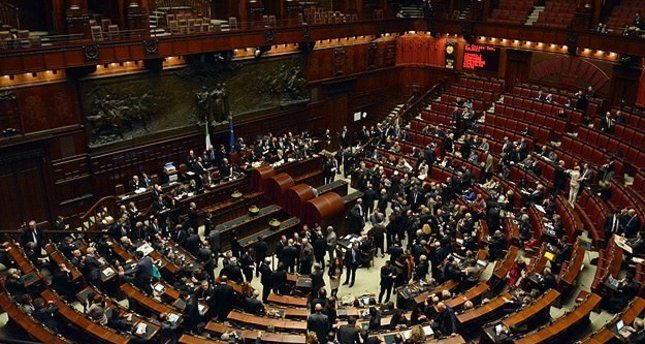 by Anadolu Agency Feb 01, 2015 12:00 am
Sergio Mattarella has been elected Italy's new president Saturday, ending a period of political uncertainty in the recession-ravaged peninsula.

Mattarella, aged 73, received as many as 665 votes in the fourth ballot for head of state, the first one that required only a simple majority of half the votes but he fell just short of the 673 votes or two thirds majority that had been required in the first three votes held Thursday and Friday.

The 'Grand Electors' who voted for the new president - members of both houses of parliament and regional government representatives - gave him a four-minute standing ovation, in which parties from across the political spectrum joined, except for the opposition radical M5S.

The smooth outcome of the byzantine vote was a significant victory for Premier Matteo Renzi, who gambled on the candidacy of Mattarella, a man of the left and constitutional judge who faced stern opposition from right-wing media mogul Silvio Berlusconi.

Outgoing head of state Giorgio Napolitano, 89, who stood down this month after seven years as president officially due to old age, praised the choice of his successor, saying it represented "a boost in the quality of politics" in Italy.

Sicilian-born Mattarella, an avuncular figure with his white-died, bouffant hairstyle, is widely respected for his honesty and previously served as a deputy prime minister.

He has also been considered a symbol in the fight against organized crime since his brother, the head of the Sicilian regional parliament, was gunned down by the Cosa Nostra.