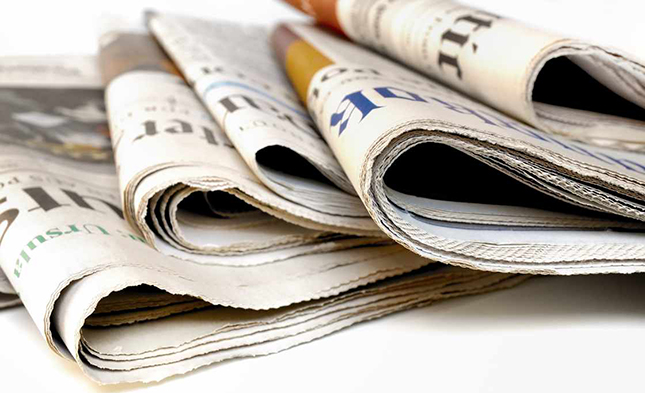 by Compiled from Wire Services
Feb 12, 2015 12:00 am
Media freedom across the globe suffered a "drastic decline" in 2014 caused by wars, violence during protests and economic crises, Reporters Without Borders has said.

In its 2015 World Press Freedom Index released Thursday, Reporters Without Borders state there were 3,719 violations of freedom of information in 180 countries in 2014 - an eight percent increase compared to a year earlier.

Press freedom in European Union-Balkan countries has been declining in absolute terms according to the Paris-based NGO.

"This disturbing trend reflects a two-fold phenomenon: the excesses of some member countries on the one hand and the inability of EU mechanisms to contain them on the other," it added.

However, some European countries ranked highest on the press freedom list such as: Finland, Norway, Denmark, the Netherlands and Sweden.

"Government interference in the media is a reality in many European Union countries," the NGO said. "It is facilitated by the concentration of media ownership in ever fewer hands and a lack of transparency about ownership."

Examples of "troubled" countries are Bulgaria, Greece, Italy and Luxembourg.

Luxembourg was in the spotlight after an investigation by the International Consortium of Investigative Journalists in early November 2014, accusing hundreds of big-name corporations like Pepsi, IKEA and FedEx of securing secret tax deals with the tiny EU member state.

"There has been an overall deterioration linked to very different factors, with information wars, and action by non-state groups acting like news despots," the head of the Paris-based group, Christophe Deloire, told AFP.

The Reporters Without Borders 2015 World Press Freedom Index stated that there were 3,719 violations of freedom of information in 180 countries in 2014 - eight percent more than a year earlier.

All parties in conflicts raging in the Middle East and Ukraine were waging "a fearsome information war" where media personnel were directly targeted to be killed, captured or pressured to relay propaganda, it said.

The Islamic State of Iraq and al-Sham (ISIS) group active in Syria and Iraq, Boko Haram in northern Nigeria and Cameroon, and criminal organisations in Italy and Latin America all used "fear and reprisals to silence journalists and bloggers who dare to investigate or refuse to act as their mouthpieces," said the watchdog, known by its French initials RSF.

North Africa and the Middle East contained notable "black holes" in which "entire regions are controlled by non-state groups in which independent information simply does not exist," the group said.

"The criminalization of blasphemy endangers freedom of information in around half of the world's countries," the report said, noting that religious extremists sometimes also go after journalists or bloggers they believe do not sufficiently respect their god or prophet.

RSF's ranking put Iran, China, Syria and North Korea among the countries with the very worst levels of press freedom out of the 180 evaluated.

"Police misconduct" during the Occupy Central protests in Hong Kong earned that territory a slide to 70th position.

The best-rated nations were northern European states such as Finland, Norway, Denmark, the Netherlands and Sweden, with New Zealand, Canada and Jamaica also making the top 10.

The United States ranked 49, three spots lower than in the previous report, in part because of what RSF said was the US government's "war on information" against WikiLeaks and others.

In South America, Venezuela stood out with a 20-notch fall to a ranking of 137 due to the National Bolivarian Guard opening fire on clearly identified journalists during demonstrations.

Libya dropped 17 places to 154 because of the national chaos that has seen seven journalists murdered and 37 kidnapped.

Russia slipped to the 152nd spot after introducing "another string of draconian laws," website blocking and the extinction of independent media.
"Press freedom... is in retreat on all five continents," RSF declared, claiming its indicators were "incontestable".
Last Update: Feb 12, 2015 3:46 pm