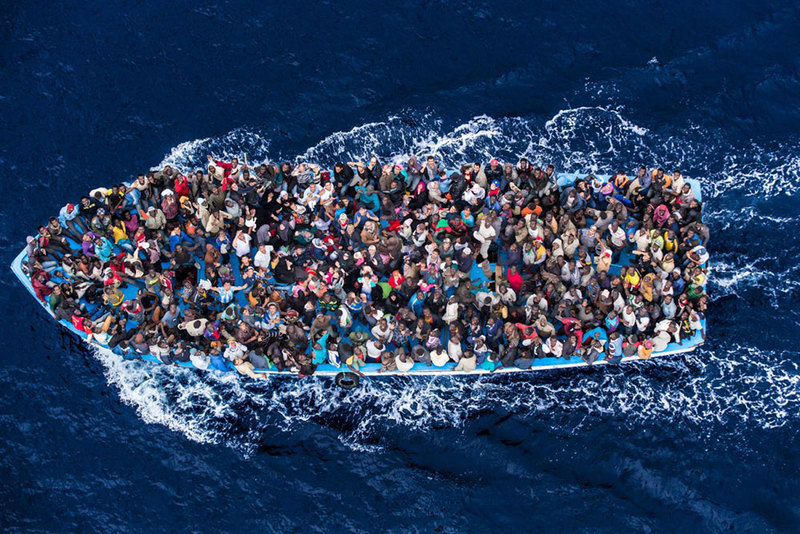 by Mar 04, 2015 12:00 am
The number of migrants crossing the Mediterranean is putting a "disproportionate" burden on the shipping industry, threatening the tradition of maritime rescue, a UN-hosted conference heard on Wednesday.

Peter Hinchliffe, secretary general of the International Chamber of Shipping, told AFP that 800 private vessels were diverted to rescue some 40,000 migrants at sea in 2014 alone.

"That's way beyond the scale that was ever envisaged," he said on the sidelines of the two-day London conference that brought together humanitarian, development, labor and shipping organizations.
Each time a ship is diverted for two or three days to disembark migrants, it costs the shipowner between $50,000 and $80,000, he said.

The conference also heard about an emerging new tactic where smugglers pack crewless cargo ships with people and abandon them, as happened twice in January off the coast of Italy.

Laurent Muschel, director of migration and asylum at the European Commission, said that the European Union's border agency Frontex was currently monitoring a dozen ships that might be used for such a purpose.

The International Maritime Organization, a UN agency, said that there was "particular concern" about cargo ships being used to smuggle migrants.

But Hinchliffe said the industry could not do much, saying it was up to the flag countries of the ships to stop them being used by people smugglers.

Critics have condemned Triton, the EU's maritime patrol mission, as inadequate and merchant vessels often find themselves picking up hundreds of migrants clinging to leaky boats.

There has long been a tradition that ships rescue distressed people at sea, and it became law under a 1982 UN Convention.

But industry figures said the pressure is becoming too much.

"There is a real concern here that the well-established legal system which is based on the centuries-old tradition of rescue at sea is under threat," said Koji Sekimizu, secretary general of the International Maritime Organization.

Volker Turk, director of international protection at the UNHCR, agreed there had been a "disproportionate burden" on the industry.

"There needs to be much more focus on states, in terms of providing a robust search and rescue mission," he said.

"We need criminal law enforcement against the smugglers... and we need alternative pathways for people to come to Europe," he continued.

And the deaths continue to mount -- at least 10 died after a ship capsized off Sicily overnight.

Muschel defended the work of Triton, but said: "A search and rescue operation cannot save every life."