US ambassador attacked in Seoul 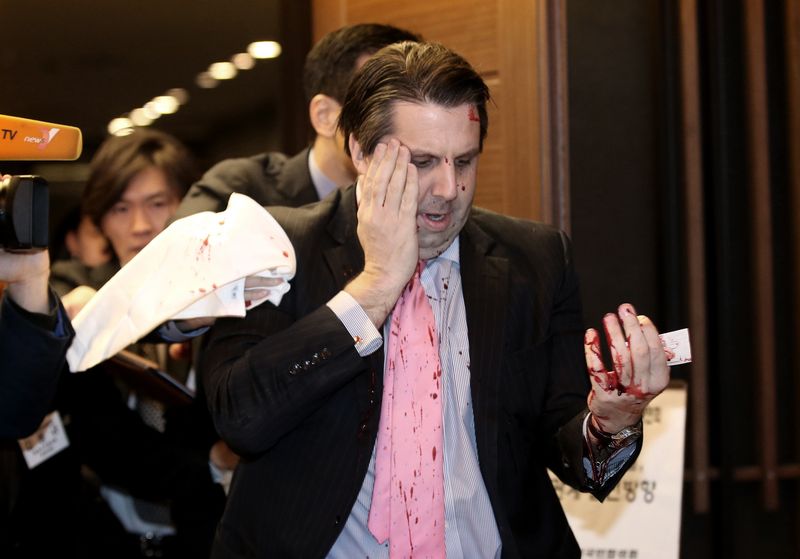 by Mar 05, 2015 12:00 am
The US ambassador to South Korea, Mark Lippert, has been injured in an attack by a blade-wielding assailant in Seoul, police and television reports said.

The YTN news channel, citing witnesses and police sources, said a man with a blade concealed in his right hand attacked Lippert as he was attending a breakfast function at the Sejong Cultural Institute in central Seoul on Thursday.

Video footage, in the immediate aftermath of the attack, showed the ambassador being rushed out of the building holding one hand to his bleeding right cheek, with his other hand smeared with blood.

Lippert, 42, was bundled into a police car and rushed to hospital, where a US embassy spokesman said he was in a "stable" condition.

Security staff and police officers were seen jumping on the assailant, who was dressed in traditional Korean clothes and reportedly shouted an anti-war slogan as he lashed out at the envoy.

Nearly 30,000 US troops are permanently stationed in South Korea and the US would assume operational command in the event of an armed conflict with the North.

Lippert, a former US assistant secretary of defense for Asian affairs, took up his post in South Korea in October last year.

Some television reports said the attacker was known to police and had previously assaulted the Japanese ambassador to Seoul in 2010.
Last Update: Mar 05, 2015 9:49 am
RELATED TOPICS