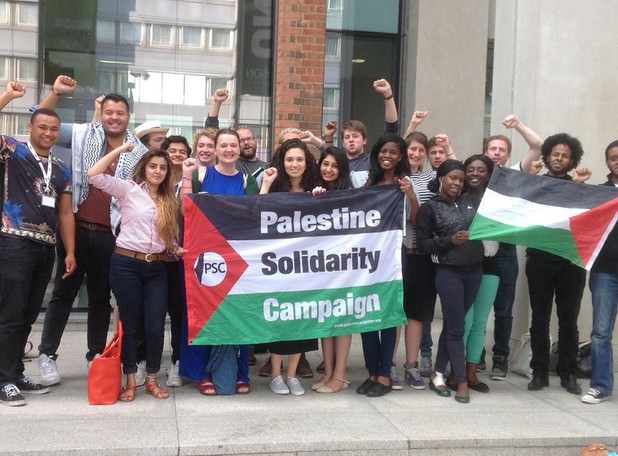 by Daily Sabah with AA Jun 03, 2015 12:00 am
Former Israeli foreign minister Avigdor Lieberman said the British National Union of Students' decision to join a worldwide Israeli boycott movement was a "submission to the dictates of radical Islam."

Hamas praised the decision in a statement, saying it was a "deterrent to Israel."

The NUS decided to join the Boycott, Sanctions and Divestment Movement, known as BDS, on Tuesday.

The motion, called "Justice for Palestine," passed with 19 votes in favor, 12 against and three abstentions.

The decision, however, is non-binding for student unions in different university institutions across the U.K., which will have to take individual decisions on the matter.

Speaking to Anadolu Agency, Khalid Tamimi, vice president of the General Union of Palestinian Students-United Kingdom, said the motion was a "fundamental step forward in the right direction to build the momentum needed in the U.K. and across the globe to help reach a fair and just solution to champion Palestinian statehood, human rights and peace in the region."

"It is our duty today to take a firm and clear stand against Israel's continued violations of international law and human rights," he added.

"We, together, must take the action needed to end the current climate of Israeli immunity," Hanna Issa, a Palestinian legal expert, said. "Netanyahu's government program considers opposing the boycott movements as essential in order to ensure Israel's security."

Israel's parliament will meet Wednesday to "hold an emergency session to discuss Israel's status on the international level, after growing a boycott campaign against Israel around the world," Israeli radio reported.

Israeli Prime Minister Benjamin Netanyahu criticized the decision at the beginning of a meeting with Canadian Foreign Minister Rob Nicholson in West Jerusalem.

"A British students' organization has decided to boycott Israel," Netanyahu said. "They are denouncing Israel and not denouncing Daesh, and so they are only denouncing themselves."

Israeli President Reuven Rivlin had previously warned of the dangers of academic boycotts of Israel in the U.S. and Europe, describing it as a "serious matter."
Last Update: Jun 03, 2015 7:34 pm
RELATED TOPICS