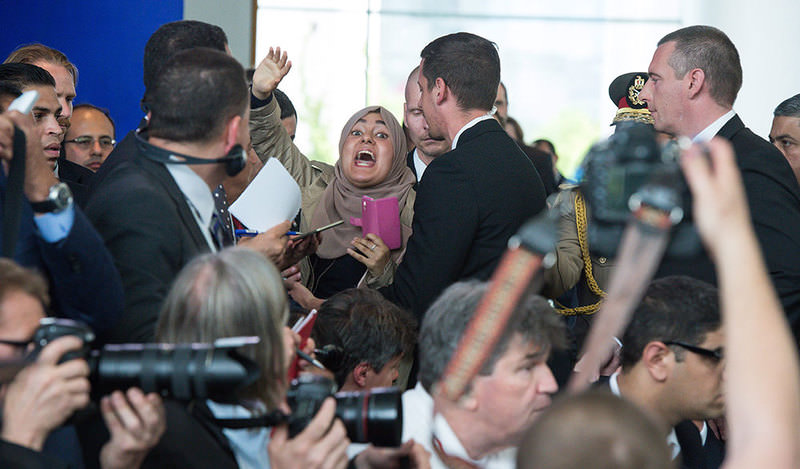 by Daily Sabah Jun 03, 2015 12:00 am
A young Egyptian shouted "murderer" to Egypt's 2013 coup leader and President Abdelfettah al-Sissi during a joint press conference on Wednesday with Chancellor Angela Merkel during his controversial visit to Germany.

Fagr Eladly, reportedly a medicine student and a journalist, shouted when she was denied to ask a question and showed the Rabaa sign that correlates with pro-Muslim Brotherhood or anti-coup movements.

Eladly was forced out of the conference room, while Merkel and Sissi were also leaving.

During the conference, Sissi reminded that there are upper courts that can still decide on the democratically-elected President Mohamed Morsi case, however, he abstained from further comments.

Outside the Chancellery, two groups, one pro and one anti-Sissi, held banners and shouted slogans.

During the conference, Merkel stressed they do not share the same opinion regarding the death penalty and human rights issues. Still this difference did not block a $9 billion gas and wind power plants deal between German electronics giant Siemens and Egypt, the company's largest single order ever.