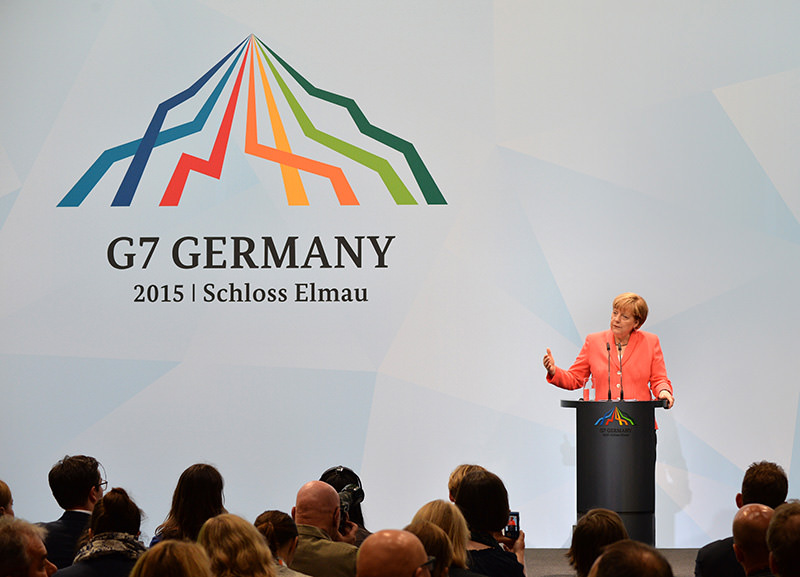 German Chancellor Angela Merkel delivers a press conference during the G7 summit at Elmau Castle in Elmau, Germany, 08 June 2015 (EPA Photo)
by Daily Sabah Jun 09, 2015 12:00 am
The agenda of the two-day long 41st G7 summit held on June 7-8, was dominated by talks about Ukraine, the Greek bailout, climate change, and measures against extremist insurgencies.

The leaders discussed the escalating conflict in Ukraine and Russia, marking the second year that Russia is excluded from the summit as punishment for fueling the last year's rebellion in Eastern Ukraine. US President Barack Obama pressed European leaders to maintain sanctions against Russia until a diplomatic solution to the conflict is reached, saying: "The G7 is making it clear that if necessary we stand ready to impose additional significant sanctions against Russia."

Benjamin Rhodes, a deputy national security adviser to Obama, said: "Most urgently, the focus is on maintaining the unity around the sanctions effort that has had very significant consequences on the Russian economy."

German Chancellor Angela Merkel, who hosted the event, said the Greek financial crisis were central to the discussions, for which the director of the IMF, Christine Lagard, was present. Part of the bailout deal is reforms that Greece must undertake. However, Greek Prime Minister Alexis Tsipiras has rejected reform proposals, leaving the country in debt without a solution and still haggling with its international creditors, the EU, ECB, and IMF.

Merkel warned "we don't have much more time" to resolve the debt crisis, after negotiations on reforms between Athens and its creditors have proven unsuccessful for the past five months. Without these reforms, Athens has no access to the 7.2 billion Euros ($8 billion) in rescue funds that Greece needs to avoid defaulting. Greece's potential default on payments could lead to Greece exiting the Euro Zone and many fear its repercussions on the world economy.

The G7 leaders have pledged commitment to transform electricity generation to renewable energy and phase out fossil fuels by 2050, cutting greenhouse gas emissions by 40 to 70 percent by 2050 compared to 2010 levels. The goals are a signal the end of the fossil fuel era, but experts are wary of how realistic the leaders' announcement could be implemented. Sam Smith, who leads the WWF's Global Climate and Energy Initiative, reportedly said, "They've given important political signals, but they could have done more, particularly by making concrete national commitments for immediate action."

The leaders also reaffirmed their pledges to provide to the UN-led Green Climate Fund, which aims to raise $100 billion by 2020 to assist developing countries' economies in adapting to low-carbon, renewable energy sources. The fund, however, has only raised roughly $10 billion in commitments.

Prime Minister Abadi discussed the US-led efforts to help his country battle the self-proclaimed Islamic State of Iraq and al-Sham (ISIS) and have seized on third of the state's territory, creating a pressing refugee crisis in the region. In regards to the campaign against ISIS, U.S. President Obama has stated that there is not yet "a complete strategy," adding "The details of that are not yet worked out.