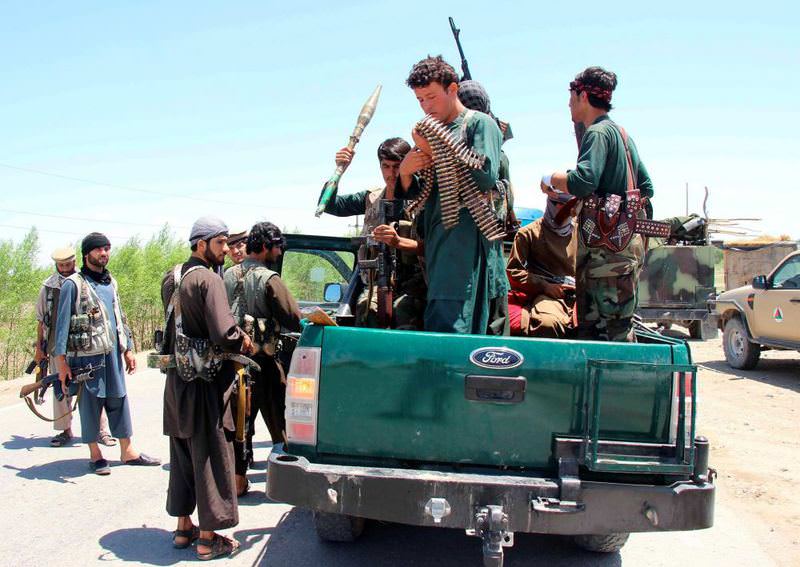 by Jul 02, 2015 12:00 am
A peach-fuzzed teenager clad in camouflage fatigues, Mohammad Jawad could be mistaken for a boy scout, but he commands one of hundreds of Afghanistan's local anti-Taliban police units, accused of stoking insecurity. The U.S.-funded Afghan Local Police (ALP) operate as surrogate village armies to fill a security vacuum in the remote Taliban-infested countryside, supplementing security forces which are stretched on multiple fronts as they face their first fighting season without the aid of NATO troops. ALP serve as a pivotal first line of defence against the stubborn insurgency, rapidly spreading across the north from its southern hotbeds, but the word "police" is seen as a misnomer, they are widely likened to militias owing to their shady reputation for lawlessness and brutality that is fuelling support for the Taliban in some areas.

Jawad, 19, took the reins of the ALP unit in his native Kasab village in the volatile northern province of Kunduz from his father, who was assassinated earlier this year in Kabul. The 110-strong force is comprised mostly of farmers and shopkeepers. "You see the white flag there? That's the Taliban," said the high school graduate, pointing a few hundred metres from his fortified base in Kasab, surrounded by wire-topped blast walls and mud-filled trenches that serve as sniper lairs. "Without ALP the militants will come marching across the field, chop our heads off and turn this village into a Taliban haven," added Jawad, flanked by gun-toting loyalists. Kunduz has seen weeks of stalemated fighting since the Taliban launched their annual spring offensive in April, with territory passing back and forth between the government and insurgents. The Taliban, buttressed by battle-hardened Central Asian fighters in their ranks, recently captured the district headquarters of Chardarah, adjoining Kunduz city, triggering fears they would overrun their first provincial capital since the 2001 U.S. invasion of Afghanistan.

It was subsequently retaken by government forces, but the Taliban are targeting major cities in what analysts say is a tactical strategy to be in a position of strength before any possible peace talks with the government. The bloody stalemate has taken a heavy toll on civilians, forcing tens of thousands to flee their homes. Kasab, located in Chardarah, is replete with beige-and-green farms and fruit orchards, and littered with the detritus of war, mangled remains of burnt-out vehicles and abandoned houses scarred by bullets.

Established in 2010, the ALP are deployed in 29 of Afghanistan's 34 provinces, a force of around 30,000 fighters that President Ashraf Ghani's government plans to scale up to 45,000, according to a recent report by the International Crisis Group (ICG). But the ICG said the proliferation of what it called "cheap but dangerous" village defence forces, seen as a cornerstone of the U.S. exit strategy from Afghanistan, was exacerbating the Taliban insurgency rather than quelling it. With inadequate training, a lack of government oversight and a pervasive culture of corruption and impunity, some ALP units have morphed into brutal criminal gangs. In the northern province of Faryab, one unit was accused of using a dry well filled with snakes as a torture chamber, the ICG said. Another used a captive in an open field for target practice. And one band of ALP fighters dragged a village elder, who complained about their abusive behaviour, behind a pickup truck until he was dead. Their terrifying tactics including theft, rape and drug trafficking have turned some villages into ghost towns while residents have chased them out of other areas, paving the way for the Taliban. The rise of ALP and other militia armies, riven with internecine rivalries, has stoked fears of strife in a nation still haunted by a devastating civil war in the 1990s that set the stage for a Taliban takeover.

Despite arguments by officials that ALP forces are a crucial tripwire for insurgents, they are often outgunned by the Taliban and are estimated to be losing men at three to six times the rate of regular security forces. Commander Gul Mohamed said the Taliban in May captured 23 fighters of his ALP unit in Gurtepa area of Kunduz after surrounding them for three days. "We sent desperate radio messages to ANA (the Afghan National Army) for help but none came," he told AFP in a safe house in Kunduz city, fingering his prayer beads. The fighters were released with the intervention of village elders after striking an unusual deal, the men pledged two male relatives each as guarantors who would be killed if the men returned to ALP. "It is ANA's job to fight the Taliban, but we (ALP) are forced to fight, sacrifice and die everyday," Gul said. Gul cited a lack of food rations for his men and an inventory of antiquated weaponry. He pointed at a marker on his Kalashnikov emblazoned with its manufacturing date: 1963.

Back at Jawad's base, Kasab's ALP fighters said growing insecurity had left them with no choice but to take up arms against the Taliban. "This village was once full of farmers, now it's full of gunmen," said Rahmi Khuda, a middle-aged gold-toothed fighter with 12 children. He said the Taliban seized one of his sons recently when he was tilling his farm. "A Taliban commander called my mobile and mockingly said: 'What should we do to him? Behead him and send back his body?'," Khuda recalled. "I said: 'behead him. Then I will cut off 50 Taliban heads and keep their bodies.'" Khuda's son was returned the next day.
Last Update: Jul 02, 2015 8:32 pm
RELATED TOPICS