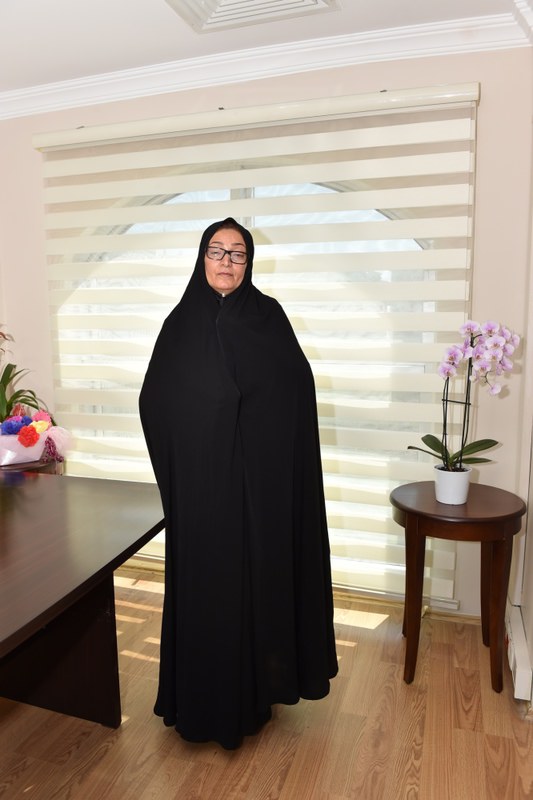 by Sühem Özge Terece Sep 02, 2015 12:00 am
It was last year when pictures of an Iranian woman appeared in the press worldwide who gave a last-minute pardon to her son's killer after slapping his face just before he was about to be executed, which is not a common scene in Iran's executions. Yesterday, Samereh Alinezhad was in Istanbul along with her family on an invitation from the Maltepe Municipality of Istanbul, which elected her "mother of the year" to mark the World Peace Day. Alinezhad, Maltepe Mayor Ali Kılıç, Cultural attache of Islamic Republic of Iran Abdulreza Rashed, Alinezhad's husband Abdolghani Hosseinzadeh and her daughter Fatemeh Hosseinzadeh all released doves for peace on World Peace Day and gave messages of peace for humanity.

Alinezhad's son Abdollah Hosseinzadeh was stabbed and killed in a street fight in 2007 when he was 18. Abdollah and his killer Balal had known each other as they sometimes played football together. Losing her youngest son in an accident years ago, Alinezhad was furious in grief after she lost her second child and was determined that Balal would be hanged. However, just seconds away from the execution, Alinezhad suddenly climbed up on a stool and slapped Balal's face instead of pushing away the chair as expected. Instead, she asked to unhook the rope from Balal's neck and declared she forgave him.

Alinezhad and her husband talked to Daily Sabah ahead of the ceremony. She said she was really determined not to spare Balal's life until the last day. According to Iranian law, a victim's family can decide whether the perpetrator should be hanged or pardoned even though they do not interfere with jailing procedures. Recalling those days, Alinezhad said: "I remember we demanded to delay the execution two times, as once it corresponded to a holy month and the other one was in Nowruz," she said. As Nowruz marks the beginning of the year in the Persian calendar and is a very important festival in Iran, the family decided to postpone it once more. "The third time was approaching and I was talking to myself and saying, 'Never!' I was in total grief and could not find a reason why I would forgive him after he did not have pity on my son and my family," she said.

She said it was obvious that many of her relatives, neighbors and friends who flowed through her house the night before the execution were looking for a sign of whether it was possible for her to forgive her son's killer, but none of them expected her to do it as she firmly believed that he should be punished. Under Iranian law, Alinezhad's husband could overturn the penalty, but he left the decision up to his wife. She said she was talking to her husband, saying that she could not persuade herself to forgive, and in response her husband said: "Just look to God, then you will find your way."

When asked what the motivation was that made her go up to Balal and decide to forgive him seconds away from his execution, Alinezhad answered: "I cannot find a word to explain this motivation. The only thing I am sure about is that it was God who helped me and suddenly gave my heart a sense of mercy and I could not stop myself from slapping the killer in the face." Alinezhad said it was exactly that time when her rage and sense of vengeance gave its place to mercy and forgiveness as if slapping was equal to execution. "I just felt as if rage, anger and vengeance all vanished in my heart after I slapped him hard. Then I decided to forgive him. Since that day, I do not have these feelings in my heart," she said.

After the incident, the epitome of tolerance and forgiveness, the killer's mother went down on her knees in front of Alinezhad and hundreds of people visited the family's home for weeks. Her husband said several people started campaigns to spread what Alinezhad did to other parts of the country and more examples have been experienced. "With her decision, she actually saved other people's lives, too, even though it was in an indirect way," her husband said. Many state officials and hundreds of people even from other countries called and visited them to congratulate the family.

According to the information that the family got, the killer completed his term of imprisonment after seven years, but he and his family moved to another town.

Alinezhad said she has never regretted her decision, emphasizing that what brings inner peace most is forgiveness. "Before I forgave the boy, I did not know how wonderful it feels to forgive someone. After the incident, I felt I have completely changed and become a peaceful person. I suggest for everyone to forgive no matter what it is about. After that, one can easily see that no punishment, death, war or rage can give the relief that forgiveness gives," she said. Her husband also said people must learn the importance of forgiveness from many Muslim elders who were always in favor of mercy and must shape our lives and behaviors in accordance with these feelings.

Recalling World Peace Day, Alinezhad said every problem can be solved and wars can be prevented with love, respect and forgiveness in one's heart. "Every person is responsible for maintaining peace, as it starts from your little town and then expands to your country and in the end to the whole world. If people have these feelings in their hearts then none of these problems will occur. People should learn that hatred and holding grudges only prevents people from going further," she said, recalling a Persian saying: "Thorns can easily turn into roses with love." Alinezhad and her family celebrated World Peace Day and emphasized once more that world peace is possible with love and mercy.
RELATED TOPICS