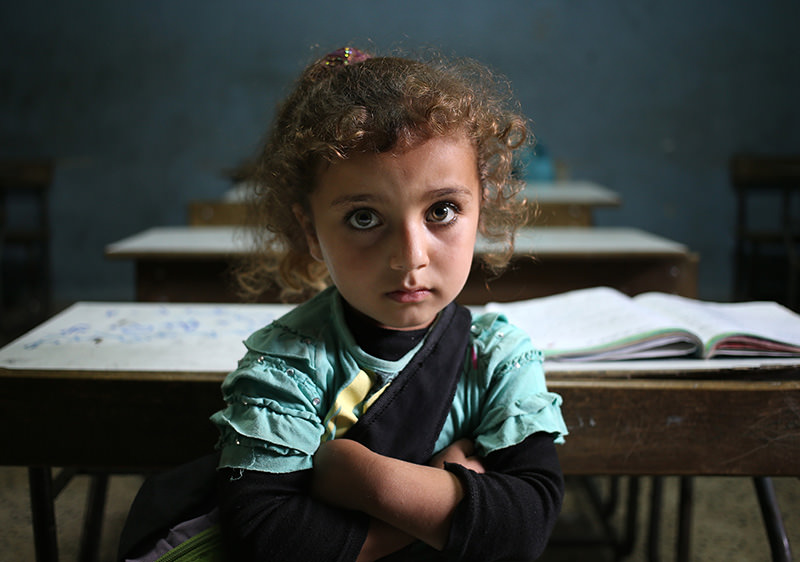 In this Thursday, May 29, 2014 file photo, a Syrian refugee girl sits in a classroom at a Lebanese public school where only Syrian students attend classes in the afternoon, at Kaitaa village in north Lebanon (AP photo).
by Associated Press Sep 09, 2015 12:00 am
The rate of child deaths around the world has dropped by more than half since 1990 but not enough to reach the United Nations goal of a two-thirds reduction by 2015, according to a new report released Tuesday evening.

New estimates show that under-five deaths fell from 12.7 million per year in 1990 to 5.9 million this year, the first time the figure has gone below 6 million.

But despite the decline, 16,000 children under the age of five still die every day, according to the report by the U.N. children's agency UNICEF, the World Health Organization, the World Bank Group, and the U.N.'s Population Division.

Based on the data, UNICEF reported that 48 million lives of under-five youngsters have been saved since governments committed to achieve the U.N. goal in 2000.

World leaders are expected to adopt a new set of goals for the next 15 years at a U.N. summit later this month. UNICEF said 38 million more lives of young children can be saved if progress to reduce child mortality is accelerated.

UNICEF Deputy Executive Director Geeta Rao Gupta said that since 2000 many countries tripled the rate of reduction of under-five mortality.

"But the far too large number of children still dying from preventable causes before their fifth birthday and indeed within their first month of life should impel us to redouble our efforts to do what we know needs to be done," she said.

According to the report, the biggest challenge remains the first 28 days of life, when a massive 45 percent of under-five deaths occur.

The leading causes of deaths of children under five are premature birth, pneumonia, complications during labor and delivery, malaria and sepsis, a potentially life-threatening complication of an infection, the report said, and nearly half the deaths are associated with "under-nutrition."

The report highlights that a child's chance of survival is vastly difference based on its birthplace.

In sub-Saharan Africa, one child in 12 dies before his or her fifth birthday, the highest rate in the world and more than 12 times higher than the one in 147 average for under-five deaths in high-income countries, the report said.