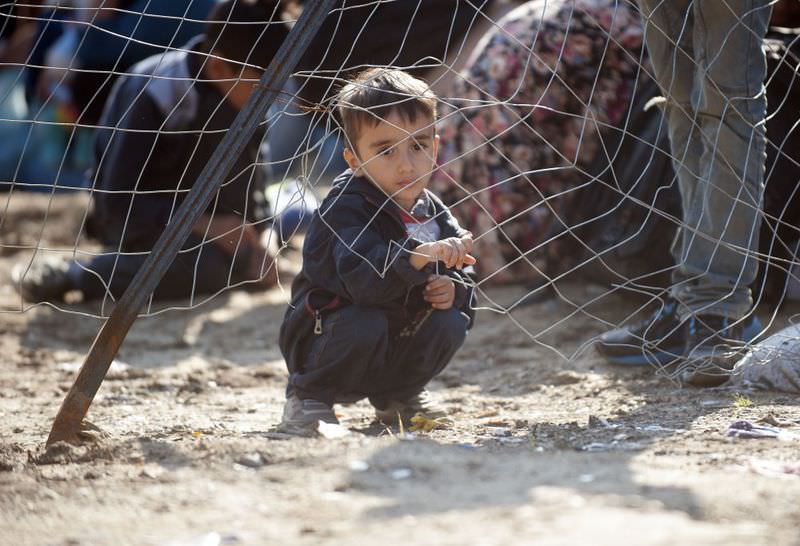 A refugee child waits with refugees wait behind a gate for Macedonian police to allow them to cross into Macedonia at the Greek border near the town of Gevgelija
by Daily Sabah with Agencies
Oct 07, 2015 12:00 am

The U.N. has announced the number of people displaced by conflict exceeds 60 million, a figure that stood at 38 million 10 years ago. UNHCR Chief Guterres urged further collaboration to support those displaced by the ‘interlinked mega crises' especially in the Middle East and Africa

When Antonio Guterres started serving as the United Nations High Commissioner for Refugees almost 10 years ago, 38 million people were displaced by conflict and persecution, and the number was declining. Today, it's more than 60 million and rising. As he prepares to step down at the end of the year, Guterres delivered a wide-ranging speech to the refugee agency's executive committee in Geneva on Monday stressing the importance of upholding the 1951 convention on protecting refugees, especially in light of Europe's refugee crisis, and how essential it is to build a positive relationship between the Western and Muslim worlds.

In a joint press conference in Geneva about the refugee crisis in Europe, European Commission Vice President Frans Timmermans and the International Organization of Migration (IOM) director general William Lacy Swing accompanied Guterres. The organizations urged the Western and Muslim worlds to collaborate on the crisis and called for massive support for countries hosting Syrian refugees -- Turkey, Jordan and Lebanon -- to prevent migrants from heading to Europe.

"This is the time to have massive support for these countries, benefiting both refugees and host communities and creating a stimulus for these countries, also to be able to allow refugees to participate in economic life," said Guterres.The "interlinked mega-crises" in Iraq and Syria have uprooted 15 million people, he said. And in the last 12 months, 500,000 people have fled their homes in South Sudan, 190,000 in Burundi, 1.1 million in Yemen and 300,000 in Libya. Tens of thousands are fleeing gang violence in Central America and there has been little or no improvement in the crises in the Central African Republic, Nigeria, Ukraine and Congo, he said.

Roughly half of Syria's population has been displaced by violence, with over 4 million Syrians now seeking refuge in neighboring countries, especially Turkey which hosts around 2 million refugees, as well as Lebanon, Jordan and Iraq.

The world is faced with 15 conflicts that have erupted or reignited in the past five years and more than two-thirds of refugees worldwide are Muslim, Guterres said, stressing the world must counter "the backward narrowness of xenophobia." He said events in recent months in Europe "have illustrated the battle of compassion versus fear, of tolerance versus xenophobia."

"There is a critical urgency to both counter Islamaphobia and to reduce the appeal of extremist ideologies for younger generations," Guterres stressed in the speech, which was also released at the U.N. headquarters in New York. He said his Office of the U.N. High Commissioner for Refugees is overwhelmed trying to provide safety, protection and aid for the tens of thousands of people fleeing war and persecution.

"We all know that the issue of migration will not go away," said European Commission Vice President Frans Timmermans. "It will be with us permanently. It is our task and our responsibility to make sure that we come to terms with that and we provide solutions to the problems. The solution can only be found on a global scale." The argument that terrorists will arrive in Europe among refugees "is the lamest excuse that is being used for not taking international responsibility," he added.

Donors provided a record $3.3 billion to UNHCR last year but this was "vastly insufficient to cover even the bare minimum" of the humanitarian budget, he said. And this year, the 33 U.N. appeals to provide humanitarian assistance to 82 million people around the world are only 42 percent funded, and the UNHCR expects to receive just 47 percent of what it needs by the end of the year, he said. Most urgently, Guterres said, the refugee agency needs $215 million for Africa to pay for already authorized expenditures, including 14 new refugee camps and the expansion of seven others. "Today we face an existential dilemma for our capacity to deliver in Africa, and I appeal to our donors to help us reduce this shortfall before the end of the year," he said.

A relatively small number of refugees can return home and the number of people being displaced around the world every day as a result of conflict has quadrupled from almost 11,000 in 2010 to 42,500 last year. The refugee chief said the spike in Syrian refugees coming to Europe this year is mainly due to three factors.

Many Syrians have lost hope that a political solution to end the war is near and after years in exile their resources have run out and living conditions have deteriorated, he said. But "the trigger" is UNHCR's funding shortfall and its struggle to provide cash and shelter to the growing number of vulnerable families ahead of winter, he said. "As a result, more and more people have embarked on the desperate journey to Europe, despite the enormous risks and cost this entails," Guterres said. "To be honest, in these circumstances, I would probably do the same with my own family."

The turmoil in the Middle East, Africa and the five-year war in Syria have led many people to flee the conflict in an attempt to seek security and shelter in a more prosperous and peaceful country, such as in Europe. However, Europe has been slammed for lacking a collaborative response to the crisis. Despite emergency meetings and calls for unity for refugee relocation schemes, several European countries, especially in the East, have been opposing to the quotas. Compared to Syria's neighboring countries, the U.N. refugee agency encouraged European countries to do more to share the burden of the international community in the refugee crisis.