World in solidarity with Paris, Muslims fear being linked to attacks 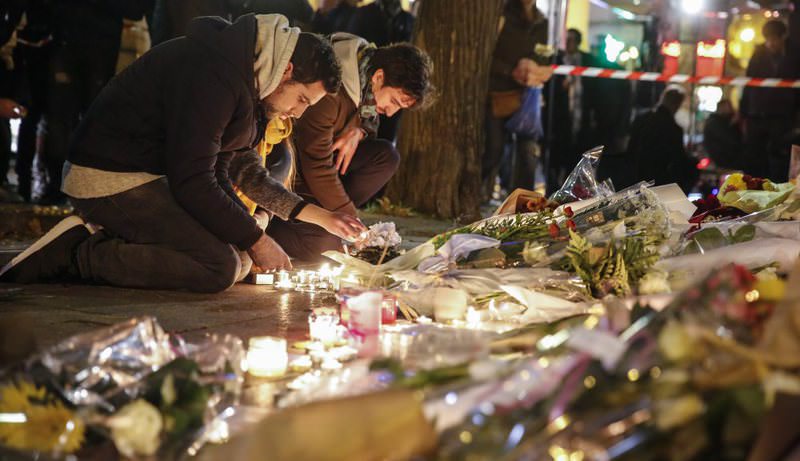 People place flowers and light candles in tribute to the victims of the Friday's attacks in Paris.
by Sühem Özge Terece Nov 16, 2015 12:00 am

After the attacks in Paris and amid increasing xenophobia and Islamophobia, Muslims and refugees in Europe are fear they may be linked to extremist attacks. Muslim clerics and several world leaders emphasized that Muslims should not be targeted because of the attacks as they suffer the most casualties from Daesh

France has been hit by one of its worst attacks since World War II as the Daesh terrorist organization has killed at least 129 people and wounded over 350, 99 of them seriously in Friday's attacks on a stadium, a concert hall and cafes in Paris.

According to French authorities, 103 bodies had been identified from the attacks and around 30 still await identification. In the wake of the deadly attacks, France declared a state of emergency and three- days of national mourning. The entire nation was enveloped in mourning and many tourist sites were closed yesterday, with thousands of French troops deployed around the city.

Meanwhile, The Associated Press (AP) reported that investigators questioned relatives of a suspected suicide bomber involved in the country's deadliest violence in decades.

"The investigation sprawled well beyond France's borders, since Paris Prosecutor Francois Molins said some attackers mentioned Syria and Iraq. Authorities in Belgium arrested three people in raids linked to the Paris attacks, and a Syrian passport found next to the body of a man who attacked France's national stadium suggested that its owner passed through Greece into the European Union last month," the AP reported.

As the world tries to overcome the shock, Muslims living in European countries and refugees seeking a new life in Europe's more prosperous countries after fleeing violence, fear that they may be the target of attacks because of their religion. Many refugees expressed fear that the Paris attack may prompt the EU to limit its capacity to accept refugees. Even though several world leaders emphasized that the world should struggle with extremist movements not with Muslims, it is not difficult to foresee Muslims affected by Daesh violence again, this time in Europe.

Many asylum seekers condemned the attacks and said they feared that Islamophobia may rise after them. The AP quoted a 29-year-old Iraqi refugee trudging through Slovenia: "This is the same act of terrorism that they do in Syria or Iraq," while another Syrian refugee, Abdul Selam, was quoted as saying refugees now "will be considered as probable attackers."

After the attacks, several European countries argued border controls should be strengthened and Poland said it will not accept the obligatory quotas of the EU, which decided to redistribute 160,000 refugees across the 28-nation bloc.

It is not the first time that Islamophobia is expected to rise after extremist attacks. After French satirical magazine Charlie Hebdo was attacked by two assailants in France on Jan. 7, which left 17 people dead, a spike was observed in Islamophobic attacks as well. Euronews reported that attacks on Muslims after the Charlie Hebdo massacre surged 500 percent.

In January, French Prime Minister Manual Valls stressed that there was no link between extremism and Islam. Similarly, Islamophobia was on rise particularly after the Sept. 11, 2001 terrorist attacks in the U.S. The burning of a mosque in Texas and fliers distributed on the streets of Boston demanding that Daesh surrender within 72 hours or Muslims in Europe and the U.S. will be killed are several examples of anti-Muslim sentiments across the U.S. But the rise of Daesh placed added pressure on Muslims and caused anti-Muslim sentiment to rise in the U.S. And recently, the influx of refugees who have fled violence in the Middle East has increased xenophobia in Europe, with arson attacks on refugee shelters and anti-Islam and anti-migrant movements such as the Patriotic Europeans Against the Islamization of the West (PEGIDA). Several world leaders and heads of organizations such as German Interior Minister Thomas de Maiziere and Vice Chancellor Sigmar Gabriel, U.S. presidential candidate former Secretary of State Hillary Clinton and NATO Secretary-General Jens Stoltenberg said that these attacks should not be linked to Muslims and the war should focus on extremists, not Muslims. Stoltenberg said Muslims are the ones who have suffered most of the casualties.

Around 5 million Muslims, mostly from North Africa, are estimated to be living in France.

Muslim organizations around the world strongly condemned the Paris attacks and said that these deadly attacks do not represent Islam. Anadolu Agency (AA) reported that the French Council of the Muslim Faith (CFCM) called the attacks "odious" and "despicable."

The Collective Against Islamophobia in France said that the attacks should strengthen unity instead of division. Other organizations also called the attacks "murderous" and said they aimed to cause fear and terror among the population.

Meanwhile, Muslim American groups also condemned the attacks and said they do not represent the Islam. AA quoted the country's largest Muslim civil rights umbrella organization as saying: "These savage and despicable attacks on civilians, whether they occur in Paris, Beirut or any other city, are outrageous and without justification." Most organizations emphasized that the "attacks are not the act of a Muslim, but of rogues who claim to follow the faith."
RELATED TOPICS