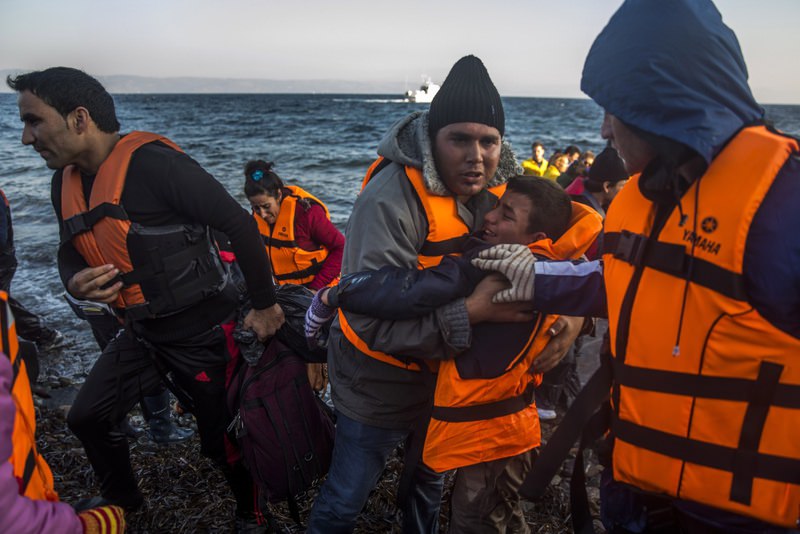 by Daily Sabah with Wires
Nov 18, 2015 12:00 am
Border fences and other controls by EU nations are "fueling a range of human rights abuses while doing nothing to halt the influx of desperate refugees," Amnesty International said yesterday.

"The expanding fences along Europe's borders have succeeded only in entrenching rights violations and exacerbating the challenges of managing refugee flows in a humane and orderly manner," said John Dalhuisen, Amnesty International's director for Europe and Central Asia. An Amnesty report, "Fear and Fences: Europe's Approach to Keeping Refugees at Bay," examines the effect of new fences, especially on the Hungary-Serbia border, and the "gatekeeper" roles of countries like Turkey and Morocco. It concludes the new measures have "denied refugees access to asylum, exposed refugees and migrants to ill-treatment and pushed people towards life-threatening sea journeys."

Refugees who tried to enter Greece, Bulgaria and Spain told Amnesty they were "pushed back by border authorities without access to asylum procedures or a chance to appeal their return, in direct breach of international law." "Pushbacks are often accompanied by violence and put people's lives in danger," Amnesty said. It said the fences have forced refugees to find other land routes or more dangerous sea routes.

About 3,500 refugees have crossed the Mediterranean so far this year as the number of arrivals by sea to the European Union reached 793,000, according to the U.N. refugee agency, nearly three times the 280,000 land and sea arrivals recorded by the EU last year. Some 648,000 refugees have arrived in Greece by sea this year, about 82 percent of the EU total, according to UNHCR data. "The global refugee crisis represents a huge challenge for the EU, but it is far from an existential threat," Dalhuisen said. "The EU needs to be responding not with fear and fences, but in the best tradition of the values it purports to hold dear," he said.

Meanwhile, the United Nations yesterday called on states not to "backtrack" on pledges made to host migrants and refugees, including from Syria, in the wake of the attacks in Paris.

"We are concerned about the reactions from some states to end programs being put in place, backtracking from commitments made to manage the refugee crisis," said U.N. refugee agency spokeswoman Melissa Fleming. "Refugees should not be turned into scapegoats and must not become the secondary victims of these most tragic events," Fleming added, after some EU states indicated they would take a hardline on the migrant crisis following the attacks.