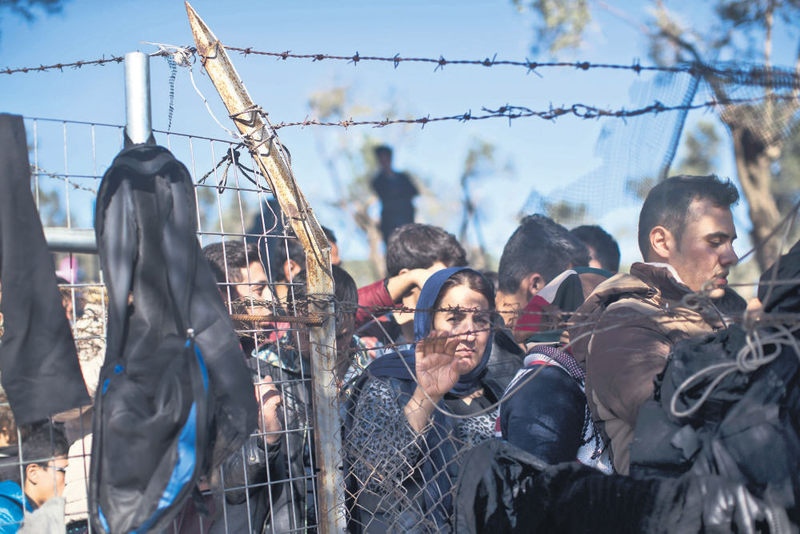 by Daily Sabah with Wires
Nov 20, 2015 12:00 am
Serbia and Macedonia, which lie on the main migrant route to central and western Europe, have begun restricting the entry of refugees to just those from certain countries, the U.N. refugee agency (UNHCR) said Thursday.

"Since yesterday afternoon Serbian authorities allow into the country only refugees from Afghanistan, Syria and Iraq" when they have documents to prove it, UNHCR spokeswoman Melita Sunjic said. "They turn back all the others to Macedonia." Sunjic said Macedonia was also barring refugees from certain countries including Liberia, Morocco, Pakistan, Sri Lanka and Sudan.

Jasmin Redzepi, president of Macedonian nongovernmental organization LEGIS, whose activists have been helping refugees and migrants at the border with Greece, told Agence France-Presse (AFP) by telephone that Macedonia was also allowing only Iraqis, Afghans and Syrians into the country. Hundreds of thousands of migrants fleeing war and poverty have crossed the Mediterranean from Turkey to Greece. Those who survive the sea journey travel overland through Macedonia and then Serbia to reach richer EU countries.

An AFP photographer at the Macedonian-Greek border said that since 10:30 a.m. local time about 200 to 300 migrants were waiting in a "no man's land" as police guarded the border, but he said the migrants were not trying to cross.

Slovenia also plans to call in army reservists to help police control migrant flows, Defense Ministry spokesman Ales Sila said yesterday. He said about 200 out of a total of 914 army reservists will be called in. The Slovenian army has been helping the police to control the migrant flows since last month. Earlier, police said they plan to start returning economic migrants to neighboring Croatia from where they crossed into Slovenia. However, Croatia's interior minister said the country has refused to take back 162 people who were rejected by Slovenia as economic migrants. Ranko Ostojic said yesterday that Croatia also will no longer allow in migrants from war-free countries who wish to pass through on their way toward Western Europe. He said Croatia has informed Serbia and Macedonia down the so-called migrant route that "it is now obvious they will not be able to pass."

Meanwhile, the European Union plans to tighten external border controls, performing more detailed checks on its own citizens as well as third-country nationals, according to a draft text seen by dpa ahead of an emergency ministers' meeting. The EU has long been concerned about the radicalization of its own citizens. Its police agency, Europol, says it has details on 2,000 of an overall 5,000 foreign fighters – Europeans thought to have fought alongside extremists in Syria and Iraq.

Ahead of winter, many refugees may be stuck in bad conditions. Sunjic said yesterday that Serbia overnight turned back to Macedonia some 200 migrants, and Macedonia has not let them in. Sunjic said, "So, they are stuck in no-man's land."

Refugees generally travel to Greece, then Macedonia, Serbia, Croatia and Slovenia before heading to Austria and Germany, where most wish to stay. The EU has been criticized for lacking a collaborative response to the crisis. The UNHCR encouraged EU countries to do more to share the burden of the international community in the refugee crisis.