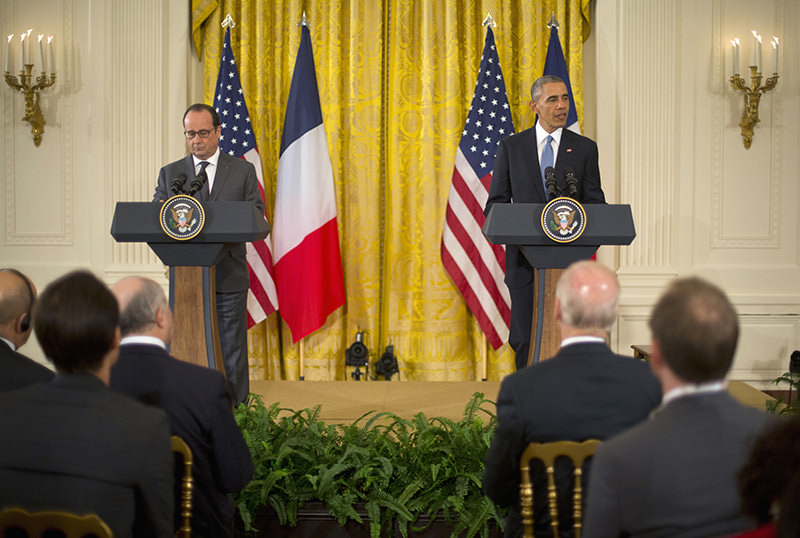 by Daily Sabah with Reuters Nov 24, 2015 12:00 am
President Barack Obama said on Tuesday the United States and France will stand united to fight Daesh militants following the Nov. 13 attacks in Paris, pledging to step up efforts to combat terrorism alongside its European partners.

"As Americans, we stand by our friends in good times and in bad, no matter what," Obama said at a news conference with French President Francois Hollande at the White House.

Hollande is trying to rally support this week for a more coordinated international campaign to destroy Daesh. He is due to visit Moscow on Thursday.

"The United States and France stand united, in total solidarity, to deliver justice to these terrorists ... and to defend our nations," Obama said, adding that Daesh and its ideology "pose a serious threat to all of us."

Hollande said the United States and France have agreed to step up strikes in Syria and Iraq to target Daesh. Hollande said he and Obama agreed on the importance of closing the Turkish border to limit the movement of extremists into Europe.

Regarding the recent incident of Turkey downing a Russian fighter jet on early Tuesday, the problem is Russians are operating too close to Turkish border, going after moderate opposition supported by Turkey, other countries, Obama said.

"It's very important right now for us to make sure that both the Russians and the Turks are talking to each other to find out exactly what happened and take measures to discourage any kind of escalation," Obama said.

Hollande said that Turkey informs NATO will all information and an escalation between two countries must be prevented.

We must work together with Turkey to keep refugees close to their country of origin, Hollande said about the ongoing refugee crisis. French President Hollande said that the priority is to take key locations from the hands of Daesh terrorists.

Hollande's meeting with Obama follows the attacks in Paris that killed 130 people at the national sports stadium, a concert venue and bars and restaurants in heart of the French capital. Daesh has claimed responsibility for the attack.

Obama said he and Hollande agreed that more needed to be done to combat Daesh's efforts.

"U.S. assistance has supported recent French strikes in Syria and we're going to keep stepping up that coordination," he said. "We will continue to do everything in our power to defend our nation."

"We will win and groups like ISIL will lose," Obama said, using an acronym for Daesh.