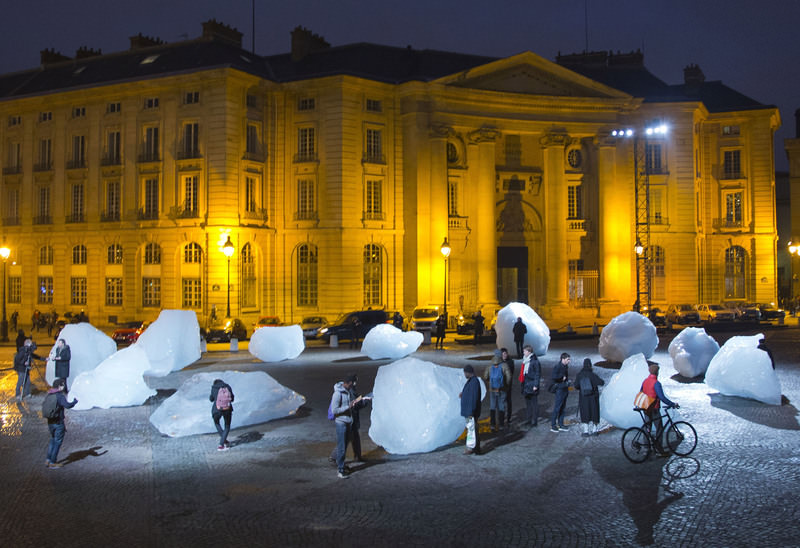 Visitors walks through ice blocks part of the sculpture ,Ice Watch,, by Danish artist Olafur Eliasson, Thursday Dec. 3 2015 in Paris. (AP Photo)
by Dec 04, 2015 12:00 am
Residents of central Paris got a chilling reminder on Thursday of the challenge facing negotiators at the world climate summit on the city's outskirts: 80 tonnes of Greenland ice left to slowly melt on the cobbles in front of the Pantheon.

The ice was scooped from a Greenland fjord and hauled to Paris as part of an installation by the visual artist Olafur Eliasson, best known for building waterfalls in New York City in 2008 and an artificial sky inside the Tate Modern gallery in London in 2003.

"I hope (this) work of art can actually bridge the gap between the data, the scientists, the politicians and heads of state and how normal people feel," Eliasson said on Thursday of the installation, dubbed Ice Watch.

He said he hoped the installation would inspire an ambitious global deal to curb climate change as negotiators from 195 countries met for a fourth day of the Paris climate summit in one of the city's northern suburbs.

The ice was pulled from Greenland's Nuuk Fjord and transported in refrigerated containers by sea to Denmark. It was then trucked to Paris, where workers in hard hats fork-lifted them into place Wednesday night. The blocks, some as high as six feet (2m), drew an audience by Thursday morning as they melted in front of the 225-year old Pantheon.

"It really shows the connection between human beings and nature, because this ice's existence is only temporary, like our existence," said Kevin Avril, who works nearby and came down for a closer look at the installation.

Organizers said the project produced about 30 tonnes of carbon dioxide but did not affect the rapid pace of melting of the huge Greenland ice sheet that scientists say is a major contributor to rising sea levels.