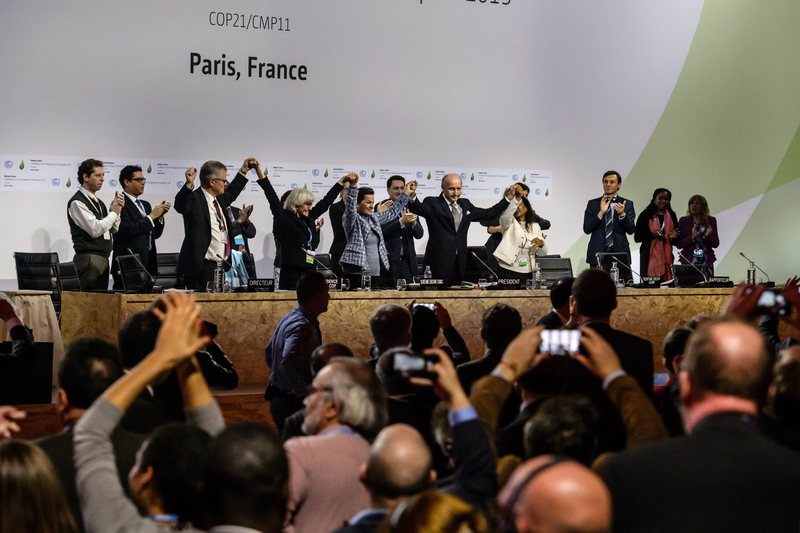 by Dec 12, 2015 12:00 am
To rousing cheers and tears of relief, envoys from 195 nations approved Saturday an accord to stop global warming, offering hope that humanity can avert catastrophic climate change and usher in an energy revolution.

French Foreign Minister Laurent Fabius ended nearly a fortnight of gruelling UN negotiations in Paris with the bang of a gavel, marking consensus among the ministers, who stood for several minutes to clap and shout their joy.

"I see the room, I see the reaction is positive, I hear no objection. The Paris climate accord is adopted," Fabius declared.

Turning to a little green hammer with which he formally gave life to the arduously-crafted pact, he quipped: "It may be a small gavel but it can do big things."

The deal, to take effect from 2020, ends decades-long rows between rich and poor nations over how to carry out what will be a multi-trillion-dollar effort to cap global warming and deal with consequences already occurring.

With 2015 forecast to be the hottest year on record, world leaders and scientists had said the accord was vital for capping rising temperatures and averting the most calamitous impacts from climate change.

Without urgent action, they warned of increasingly severe droughts, floods and storms, as well as rising seas that would engulf islands and coastal areas populated by hundreds of millions of people.

The crux of the fight to limit global warming requires cutting back or eliminating the use of coal, oil and gas for energy, which has largely powered prosperity since the Industrial Revolution began in the 1700s.

The burning of those fossil fuels releases invisible greenhouse gases, which cause the planet to warm and change Earth's delicate climate system.

Ending the vicious circles requires a switch to cleaner sources, such as solar and wind, and improving energy efficiency. Some nations are also aggressively pursuing nuclear power, which does not emit greenhouse gases.

The Paris accord sets a target of limiting warming of the planet to "well below" 2.0 degrees Celsius (3.6 Fahrenheit) compared with the Industrial Revolution, while aiming for an even more ambitious goal of 1.5C.

To do so, the emissions of greenhouse gases will need to peak "as soon as possible", followed by rapid reductions, the agreement states.

The world has already warmed almost 1C, which has caused major problems for many people around the world particularly in developing countries, such as more severe storms, droughts and rising seas, according to scientists.

Environment groups said the Paris agreement was a turning point in history and spelt the demise of the fossil fuel industry, pointing particularly to the significance of the 1.5C goal.

"That single number, and the new goal of net zero emissions by the second half of this century, will cause consternation in the boardrooms of coal companies and the palaces of oil-exporting states," Greenpeace International chief Kumi Naidoo said.

Developing nations had insisted rich countries must shoulder the lion's share of responsibility for tackling climate change as they emitted most of the greenhouse gases since the Industrial Revolution.

The United States and other rich nations countered that emerging giants must also do more, arguing developing countries now account for most of current emissions and thus will be largely responsible for future warming.

On the crucial financing issue, developing countries agreed to muster at least $100 billion (92 billion euros) a year from 2020 to help developing nations.

However, following US objections, it was not included in the legally binding section of the deal.

Ahead of the talks, most nations submitted voluntary plans to curb greenhouse gas emissions from 2020, a process widely hailed as an important platform for success.

But scientists say that, even if the pledges were fully honoured, Earth would be on track for warming far above safe limits.

In an effort to encourage countries to improve their ambitions, the agreement will have five-yearly of their pledges starting from 2023.

Nations most vulnerable to climate change lobbied hard for wording in the Paris pact to limit warming to 1.5C.

Big polluters, such as China, India and oil producing-giant Saudi Arabia, preferred a ceiling of 2C, which would have enabled them to burn fossil fuels for longer.

Nicholas Stern, a former chief economist for the World Bank who has become a prominent global advocate of climate action, also hailed the deal.

"This is a historic moment, not just for us and our world today, but for our children, our grandchildren and future generations," Stern said.

"The Paris Agreement is a turning point in the world's fight against unmanaged climate change, which threatens prosperity and well-being among both rich and poor countries."
Last Update: Dec 12, 2015 9:30 pm
RELATED TOPICS