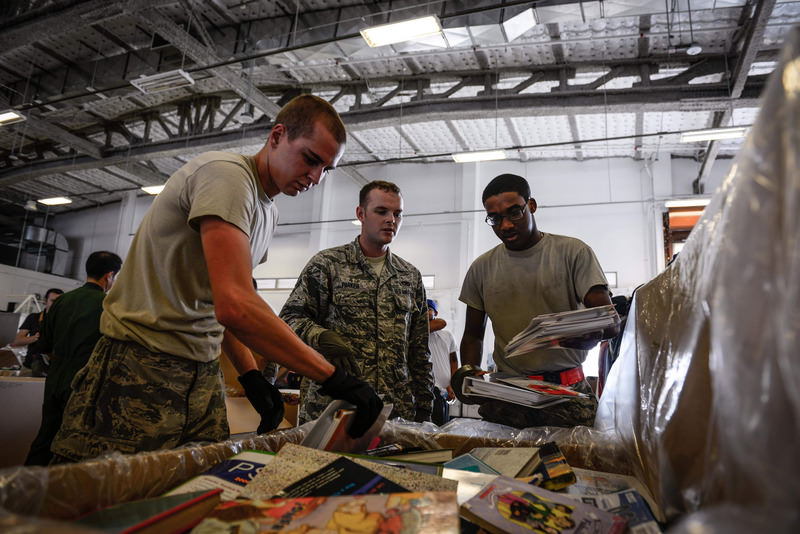 In this Dec. 5, 2015 photo provided by the U.S. Air Force, airmen are packing donated books for Operation Christmas Drop. (AP Photo)
by Associated Press Dec 13, 2015 12:00 am
Australian, Japanese and U.S. air force planes are dropping food and toys on remote atolls in the Pacific as part of the U.S. military's longest-running humanitarian relief mission.

The packages will support 20,000 people across 56 islands in Micronesia, the Mariana Islands and Palau.

The U.S. Air Force began the annual Operation Christmas Drop in 1952 when a Guam-based air crew noticed residents on the island of Kapingamarangi waving at them as they flew overhead. The crew gathered items they had on the plane, attached a parachute and dropped them to the islanders.

It's a feel-good mission that also helps the U.S. achieve political aims, namely deepening three-way cooperation with close allies Australia and Japan, who are first-time participants. Analysts say the U.S. has been boosting the trilateral relationship in recent years as it keeps an eye on China's growing military.

The boxes include books, canned food and items like fishing nets that will help islanders maintain their largely subsistence lifestyle. This year, each package will also include a soccer ball.

The planes fly low, look for a safe spot to drop the bundles then release them from the back of the C-130s. University of Guam distance education staff use ham radios to talk to the islanders throughout the year and relay their needs.

Japan and Australia each sent one C-130 to join three from the U.S.

Guillot said the three air forces have been increasing their cooperation, noting they also come together for the annual Cope North exercise on Guam and Red Flag drill in Alaska. Inviting Australia and Japan to Christmas Drop was a logical extension of other work the countries have been doing, Guillot said.

"Partnerships here in the Pacific are the key cornerstone in our strategy to maintain regional stability and prosperity. Japan and Australia share a common interest in that goal," Guillot said.

Brad Glosserman, executive director of Pacific Forum think tank in Honolulu, said the three-way relationship is the "gold standard" for the U.S. military's strategy toward allies in the Pacific. The U.S. wants to break out of "hub and spoke" system of bilateral alliances it has with five Asian countries and link multiple allies together, he said.

The U.S. has tried something similar with South Korea and Japan, but this grouping has struggled amid tensions in Tokyo and Seoul over Japan's past colonial rule of Korea.

The improved military capabilities of U.S. allies are a factor driving the increased cooperation, as is China's rise as a military power, Glosserman said.
Last Update: Dec 13, 2015 11:37 pm
RELATED TOPICS