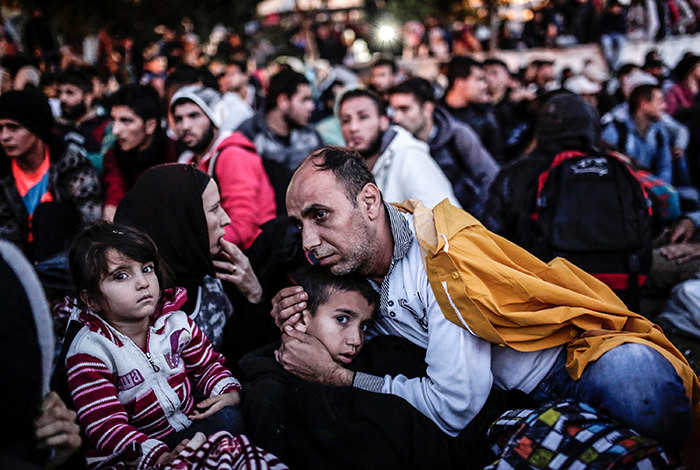 This year saw an unprecedented rise in the number of refugees fleeing conflicts and poverty, nearing above 60 million. Though the number continues to rise at an alarming rate, especially for those heading to Europe whose number approaches to 1 million this year, hundreds are still risking their lives, especially in the Aegean Sea, to reach Europe every day while host countries struggle to cope with the surge

Friday marked International Migrants Day, an occasion to remember the migrants that died in their struggle to flee their countries for a better life elsewhere. In Turkey, the day started with news of the deaths of four migrants who drowned in the Aegean Sea, joining hundreds of others dying en route to Europe, which is looking to secure its borders further against migrants, especially from Turkey, which already faces the challenge of hosting more than 2.4 million displaced Syrians. Europe has already received more than 990,000 refugees by land and sea and this figure is expected to rise by the end of 2015, while the overall number of refugees will likely pass 60 million before the new year.

With winter fast approaching, a grim situation awaits migrants opting to go to Europe. Travel by sea is the easiest, yet deadliest way to reach the continent from Turkey. Huddled aboard unsafe boats, the migrants' journey, only a few kilometers between the Turkish coast of the Aegean Sea and Greek islands, is more difficult than they think. More often than not, boats, not resistant to severe weather and overcrowding, capsize or sink, killing their occupants. Early Friday, four Iraqi migrants including two children of unspecified ages, drowned as the rubber boat they boarded from Bodrum, a popular vacation spot in southwestern Turkey, capsized while they were heading to the Greek island of Kalimnos along with nine others from Iraq and Pakistan. One other migrant is still missing. They were the latest casualties added to a death toll of 706 killed this year in the Aegean Sea, according to figures by the International Organization for Migration (IOM).

Migration rates across the globe soared this year according to the U.N. refugee agency UNHCR and may pass last year's record of nearly 60 million. "With almost a million people having crossed the Mediterranean as refugees and migrants so far this year, and conflicts in Syria and elsewhere continuing to generate staggering levels of human suffering, 2015 is likely to exceed all previous records for global forced displacement," UNHCR said. The number of displaced last year was 59.5 million and according to a UNHCR report released on Friday, this year it has surpassed the 60 million mark or roughly one in every 122 people in the world.

"Forced displacement is now profoundly affecting our times. Never has there been a greater need for tolerance, compassion and solidarity with people who have lost everything," U.N. refugee chief Antonio Guterres said in a statement. In the first six months of 2015, nearly 5 million people were newly displaced and though the majority of them stayed inside their countries, some 839,000 crossed the borders to other countries. Syria is the biggest generator of both new refugees and internal displacement according to the report, with a refugee population of 4.2 million by mid-2015, far higher than the 20,000 at the end of 2010, months after an uprising started in the country.

The number of people forcibly displaced worldwide is likely to have "far surpassed" a record 60 million this year, mainly driven by the Syrian war and other protracted conflicts, the United Nations said earlier on Friday.

Europe, the most popular destination for migrants from the Middle East, Asia and Africa saw nearly 991,000 refugees and migrants enter the continent by land and sea in 2015 according to IOM, which expects the number to reach 1 million in the near future. Quoted by Reuters, Joel Millman, a spokesman for IOM, said the number was at least four times more than for 2014, "an extraordinary and record figure" in Europe's worst migration crisis since World War Two. Millman said, "Very high flows for December in the Mediterranean are proving to be everything we feared; very lethal," pointing to the high death toll. "Obviously this is quite alarming and we are not looking forward to a winter like last year. But from what we can see, the flows remain robust and dangerous," he said.

Turkey, naturally, both due to its proximity to the heavily hit northern Syrian cities and its open-door policy, is the number one host of Syrian refugees. The latest figures from the government show the country hosts more than 2.4 million Syrians, excluding those not registered with the authorities. Both a launch pad for refugees seeking to cross into Europe and a haven for others accommodated at refugee camps near the Syrian border, Turkey struggles to address two issues with limited resources. Though it boasts spending about $9 billion for Syrian refugees, it has still been insufficient, as Turkey complains about the massive financial burden in the face of inaction by the international community. The European Union, the main recipient of Syrian asylum seekers arriving from Turkey, plans to funnel some 3 billion euros to Turkey to cope with the refugees it hosts.

Still, it is unclear if the EU funds will be sufficient as uncertainty regarding the conflict in Syria, further aggravated by the presence of DAESH, suggests Syrians may stay in Turkey longer. Only a small fraction of Syrians who took shelter in Turkey stay in refugee camps while hundreds of thousands of others either find accommodation on their own or are forced to live without a proper house due to poverty.

Far away from its southern border with Syria, Turkey strives to keep migrants out of harm's way as they increasingly take to the dangerous waters of the Aegean Sea. The Coast Guard saw perhaps its busiest year in 2015 with no visible drop in hundreds of migrants heading to Greece by the Aegean daily. Figures show the number of intercepted migrants increased 70 times in the past five years and Syrians top the list of migrants. As of Dec. 8, 63,535 Syrians were intercepted or rather, rescued by the Coast Guard, followed by 18,238 Afghans.

Murtaza Yetiş, the prime minister's chief adviser for migration and humanitarian aid, says the migration issue had significant economic, social and security costs for Turkey, though he said Turkey would maintain its sensitivity to the plight of Syrians. "Our open-door policy [since the unrest started in Syria] will continue and we will continue embracing people fleeing persecution and death regardless of their religion, sect et cetera," he said at a press conference on Thursday in İzmir, a western city on the Aegean coast. "This is not a crisis that Turkey can overcome solely on its own and this is not a crisis that will be solved merely by Turkey's measures in the region. We expect other countries to carry out their basic responsibilities under international law and opening their doors to refugees for their proper passage to those countries instead of risking their lives at sea," he said.