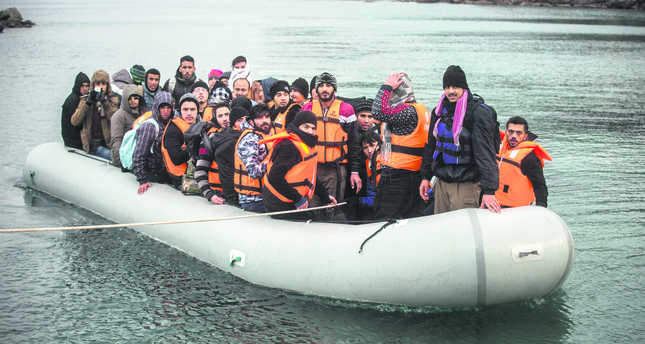 As migrants continue to make the hazardous journey across the Aegean in hopes of reaching Greece despite brutal weather conditions, a 2-year-old boy has become the first known migrant casualty of the year

A drowned two-year-old boy became the first official migrant casualty of the year on Saturday after the crowded dinghy he was traveling on slammed into rocks off Greece's Agathonisi Island, the coastguard said.

The other 39 passengers, including a woman who had fallen overboard, were rescued after local fishermen called for help. A number of other survivors were taken to the hospital to be treated for hypothermia.

The rubber vessel had set off from Turkey in the early morning in windy weather. The charity Migrant Offshore Aid Station (MOAS), which helps save migrants and refugees at sea, deployed its fast-rescue responder boat to help bring the stranded passengers to safety in a joint operation with the Greek coastguard. The toddler's body was pulled out of the water by fishermen, according to the coastguard.

The migrants, including the child's mother, were taken to the port of Pythagorio on Samos, the nearest island, which is 50 kilometers away. There was no immediate information about their nationalities. "Nothing can prepare you for the horrific reality of what is going on. Today we came face-to-face with one of the youngest victims of this ongoing refugee crisis. It is a tragic reminder of the thousands of people who have died trying to reach safety in miserable conditions," said the MOAS founder and U.S. entrepreneur Christopher Catrambone in a statement.

Despite the cold and choppy waters of the Aegean, vast numbers of migrants and refugees are still setting sail from Turkey to make the perilous journey across the Aegean hoping to reach Greece.

Last September, 3-year-old Syrian toddler Aylan Kurdi, whose limp body washed up and was photographed on a Turkish beach, became a heartbreaking symbol of the refugee crisis.

More than 3,770 migrants and refugees have died in 2015 as they tried to reach Europe by crossing the Mediterranean Sea, making 2015 the deadliest year on record for those seeking sanctuary from war and poverty, an international migration group reported.

Most of those deaths occurred along a perilous, central Mediterranean route used by smugglers operating out of Libya, according to the International Organization for Migration (IOM). The deadliest month was April, when nearly 1,250 migrants died, some 800 of whom were on board an overcrowded ship that capsized off the Libyan coast, the IOM said. Only 28 people on board survived and were taken to Italy, according to reports.

In 2015, an estimated 5,350 migrants died worldwide; whereas the death toll in 2014 was 5,017, according to the Geneva-based IOM. More than an estimated 3,770 deaths occurred in the Mediterranean in 2015, compared with 3,270 deaths recorded from the previous year. The record number of people dying in an effort to flee conflict and acute poverty are "shocking and inexcusable," said IOM Director General William Lacy Swing in a statement.

"Throughout the year, we have been reminded that much of human mobility is not voluntary," he said. "Tragically, we have seen so many who felt they had no option but to leave their beloved homelands and were later lost at sea, in the deserts or trapped in the back of lorries they had hoped would carry them to a safer and better life."

Europe is in the midst of its biggest migration crisis since World War II, according to the U.N. The number of people forcibly displaced worldwide is likely to have surpassed 60 million by the end of this year, the U.N. said. The majority of migrants come from the Middle East and Africa. The turmoil in the Middle East and the five-year war in Syria have led many people to flee the conflict in an attempt to seek security and shelter in a more prosperous and peaceful country, such as one in Europe. However, Europe has been slammed for lacking a collaborative response to the crisis.
RELATED TOPICS