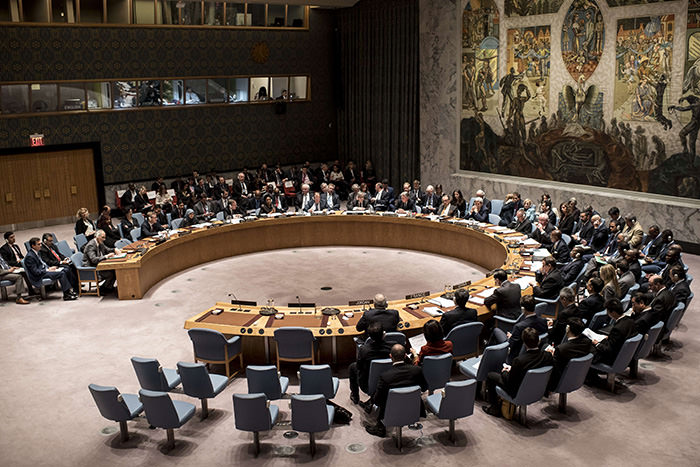 US Secretary of State John Kerry leads a security council meeting on the situation in Syria on December 18, 2015 at UN Headquarters in New York City (AFP Photo)
by Daily Sabah with Agencies Jan 06, 2016 12:00 am
The UN Security Council is considering imposing further sanctions on North Korea after it carried out a nuclear test, the British ambassador said Wednesday.

"We will be working with others on a resolution on further sanctions," Ambassador Matthew Rycroft told reporters.

"This act is profoundly destabilizing for regional security and seriously undermines international non-proliferation efforts," Ban says. "I condemn it unequivocally."

North Korea said it conducted a powerful hydrogen bomb test on Wednesday, a defiant and surprising move that, if confirmed, would be a huge jump in Pyongyang's quest to improve its still-limited nuclear arsenal.

South Korea's spy agency and outside nuclear experts cast strong doubt, however, saying the estimated explosive yield from North Korea's fourth nuclear explosion was much smaller than what even a failed H-bomb detonation would produce. The doubts didn't stop jubilation and pride in Pyongyang.

A North Korean television anchor, reading a typically propaganda-heavy statement, said a test of a "miniaturized" hydrogen bomb had been a "perfect success" that elevated the country's "nuclear capabilities might go to the next level.

A large crowd celebrated in front of Pyongyang's main train station as the announcement was read on a big video screen, with people taking videos or photos of the screen on their mobile phones and applauding and cheering.

North Korea's claim that it carried out a successful hydrogen bomb test drew swift condemnation from friends and foes alike.

China said it "firmly opposes" its neighbor's actions while others blasted it as an intolerable provocation that must be punished.
Last Update: Jan 06, 2016 5:55 pm
RELATED TOPICS