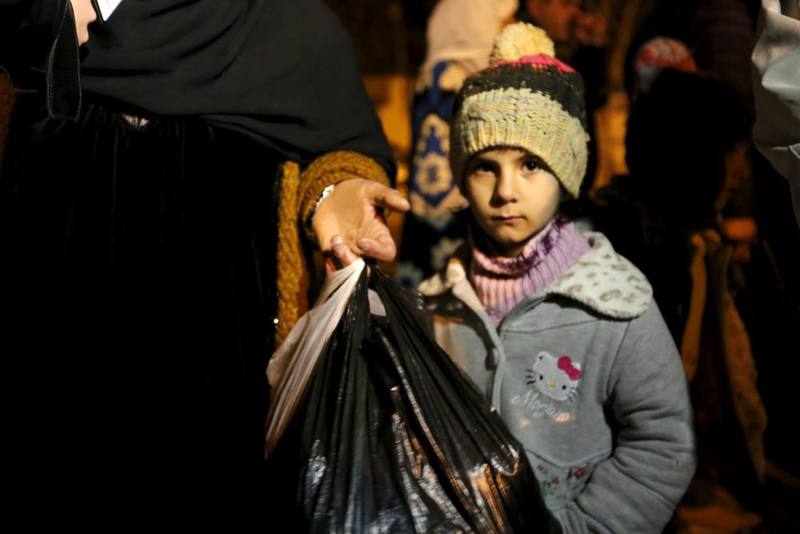 by Daily Sabah with AP Jan 14, 2016 12:00 am
Siege and starvation have left the rebel-held Syrian town of Madaya in a nightmarish state not seen elsewhere in the country, a U.N. official who traveled there said Tuesday, as some 300 residents fled and desperately needed humanitarian aid arrived. The former mountain resort, besieged since last summer by forces loyal to Bashar Assad, came to international attention in recent weeks as reports of starvation emerged and activists shared images of emaciated children and old men widely on social media. Sajjad Malik, the U.N. refugee agency's chief in Damascus, told journalists that the 'very grim' picture was the result of a blockade of food, medicine and other supplies that left the town in a "desperate situation." "There is no comparison to what we saw in Madaya," he said from Damascus by telephone to Geneva. "It is a place where you could see there are people, but there is no life... What we saw is something that was pretty horrible." Malik described seeing shivering, malnourished children and young adults, saying "most of them had not had bread or rice or vegetables or fruit for months." He said a kilogram (2.2 pounds) of rice would sell there for $300, and noted one account of one person selling a motorcycle to buy 5 kilos of rice.

A day earlier, the U.N. said that about 400 people in the town's hospital needed to be evacuated immediately for medical treatment as starvation and other factors had left them on the brink of death. Syrian authorities, rebels and aid groups have yet to respond. The U.N. goal was to obtain safe passage to evacuate the 400 later on Tuesday. U.N. officials said it was too early to determine whether anyone had died of hunger. But the aid group Doctors Without Borders has said that 23 people died of starvation at a health center it supports in Madaya since Dec. 1, including six infants and five adults over 60.

Various U.N. officials have described how locals had been forced to forage for food, such as risking walks in minefields to collect grass or cooking up "leaf soup," and were burning cardboard to stay warm in their homes. The U.N. says 4.5 million Syrians are living in besieged or hard-to-reach areas and desperately need humanitarian aid, with civilians prevented from leaving and aid workers blocked from bringing in food, medicine, fuel and other supplies.

A Syrian American family in the U.S. accused the U.S. government of turning its back on their family in besieged town near Damascus. Hussein Assaf, who Works for major U.S. trailer, said that his family members are U.S. citizens and asking for help from U.S. embassy in Beirut but embassy offered them no help. Syrian American family criticizing the State Department for "total neglect" and "shocking behavior" towards his family live in besieged town, Al Jazeera reported. In response to call for help via email, U.S. embassy in Beirut said: "Unfortunately, we are unable to assist you in this issue and you are advised to consider other options," U.S. embassy said and the family was both disappointed and frustrated. "We are blaming the State Department for turning its back on my family," Syrian American Assaf said. The U.S. has closed its embassy in Damascus in 2012.

The Independent last week reported that 40,000 civilians are starving in the town after several graphic images of malnourished civilians were released on social media. Activists said the civilians had started eating weeds, insects and even cats. "Encircled by land mines and forces from the Lebanese militia Hezbollah, hundreds are suffering from malnutrition. With severe shortages of basic foodstuffs, many have resorted to eating wild plants, insects and even cats," the Independent said. An activist told the daily that the "Lebanese [Shiite] militia, which has been fighting on the side of [Syrian President] Bashar Assad in the Syrian conflict, was effectively holding civilians hostage in order to gain leverage over two embattled [Shiite] towns in Syria's northern Idlib province. The towns Kafrayya and Fua are besieged by members of the umbrella group Jaish al-Fatah." "One of its members, Ahrar al-Sham, was among the groups that had been battling pro-government forces in the strategic town of Zabadani, which lies close to Madaya," the report said. "The price of food has spiraled uncontrollably, with a 1 kilogram bag of rice costing as much as $100. One photograph showed a car for sale in exchange for 10 kilograms of rice or 5 kilograms of baby formula. The vehicle was incorrectly attributed to Mr. Alloush, according to Mr. Ibrahim. 'I wish Mr. Jamil had a car,' the activist said. 'He could sell it rather than dying like that. The poor man used to have a bike and nothing more.' He added: 'All those who have cars, they are offering them for sale.' The activists said that they had tried and failed to raise the plight of the entrapped inhabitants of Madaya. They have become convinced that no one cares," the daily wrote.
RELATED TOPICS