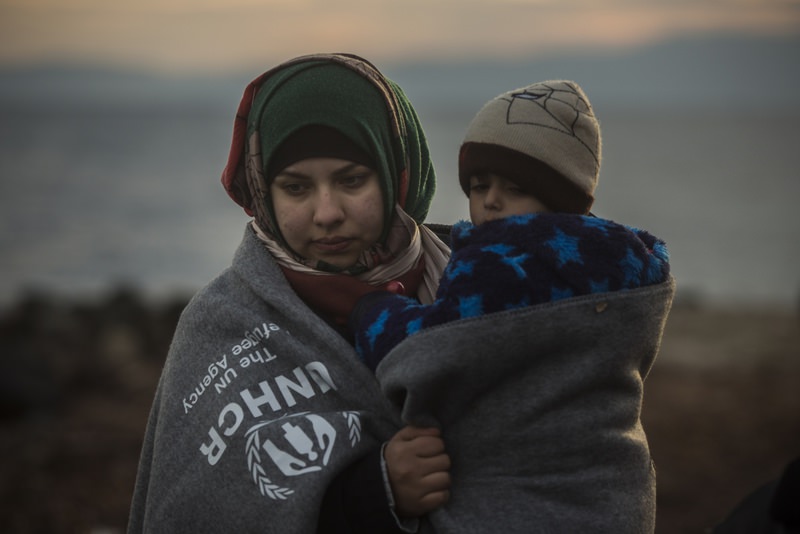 A woman holds a child on a beach near the town of Mytilene, after crossing a part of the Aegean Sea on a raft with other migrants.
by Daily Sabah with Wires Jan 19, 2016 12:00 am

As migrants continue streaming into Europe despite cold winter weather, a report by Amnesty International says that female refugees face physical assault and violence by smugglers, European security guards and refugees on their journey to Europe

Adult and child female migrants going into Europe face violence and sexual assault on every stage of their journey, according to a new report from Amnesty International.

The report released on Monday by the human rights group was based on interviews with 40 women and girls in Germany and Norway last month who had traveled from Turkey to Greece and then across the Balkans. Women and girls traveling alone or women accompanied only by children said they felt particularly under threat in Hungary, Croatia and Greece, where they were forced to sleep alongside hundreds of male refugees. Those interviewed included female refugees from Iraq and Syria.

The vast majority of the migrants streaming into Europe are men, which leaves women particularly vulnerable, aid workers say. Women in camps reported having to use the same bathroom and shower facilities as men, and some said they did not eat or drink to avoid going to the toilet. The report did not separate out incidents of sexual assault from general violence. One 22-year-old Iraqi woman told Amnesty International that a uniformed security guard in Germany offered her clothes in exchange for spending time alone with him.

Some aid workers say violence is harder to prevent because of an ad hoc system for receiving and registering refugees. "One of the challenges we have been facing is that it is taking a long time for the international community, and by that I mean governments, to wake up to this crisis and to realize that it is not something that they can wish away," Jenny Becker, protection coordinator with the International Rescue Committee in northern Lesbos in Greece, told The Associated Press.

"After living through the horrors of the war in Iraq and Syria these women have risked everything to find safety for themselves and their children. But from the moment they begin this journey they are again exposed to violence and exploitation, with little support or protection," Tirana Hassan, Amnesty International's crisis response director, said in the report.

The report said smugglers also target women who are traveling alone, knowing they are vulnerable. Smugglers offered these women "a discounted trip or a shorter wait to get on the boat" in exchange for sex when they lacked financial resources to pay for their journey.

At least three women who spoke to Amnesty International researches said they have been exposed to sexual assaults and "heard many stories along the way of women who can't afford their journey across Mediterranean and who were given the option to sleep with the smugglers for a discount."

Facilities for refugees in some European countries are also among the factors that make women more scared as they slept in facilities with hundreds of men. "Several women also reported being beaten or verbally abused by security officers in Greece, Hungary and Slovenia," the report said.

A 16-year-old refugee from Syria described one of her experiences in Greece to Amnesty: "People started screaming and shouting, so the police attacked us and were hitting everyone with sticks. They hit me on my arm with a stick. They even hit younger kids. They hit everyone, even on the head. I got dizzy and I fell, people were stepping on me. I was crying and was separated from my mother. They called my name and I was with my mother. I showed them my arm and a police officer saw my arm and laughed, I asked for a doctor, they asked me and my mother to leave."

Last year, more than 1 million migrants arrived in Europe, and are still apparently undeterred by the harsh winter weather in their bid to reach Europe. The majority of migrants come from the Middle East and Africa. The turmoil in the Middle East and the five-year civil war in Syria have led many people to flee conflicts in an attempt to seek security and shelter in more prosperous and peaceful countries, such as those in the EU. The EU, however, has been criticized for lacking a collaborative response to the crisis.

The head of the International Organization for Migration said Sunday that Europe must avoid viewing migrants as a "security threat" following the New Year's Eve assaults in Cologne and November's attacks in Paris.

William Lacy Swing was in Berlin at a time when Chancellor Angela Merkel faces mounting pressure over her open-door policy toward refugees. Germany registered nearly 1.1 million people as asylum seekers last year but most other European Union countries remain reluctant to take significant numbers. Swing told The Associated Press that Merkel and Germans in general deserve "a lot of praise and credit" for taking in large numbers of refugees, "and I think one should not let the terrible incident that happened in Cologne mar what is a very good approach to the issue."

The events in Cologne a string of robberies and sexual assaults were blamed largely on foreigners, and some suspects are asylum seekers. The Paris attacks in November already had fueled anti-immigrant sentiment in Europe.

"We don't want now, because of what happened in Paris and what happened in Cologne, suddenly to link refugees who are fleeing terrorism ... with some kind of security threat," Swing said. "We have to find a way, and I know Germany's really trying to do that now, how do we give the compelling argument to our people that, historically, migration has always been a very positive force in the lives of countries?" he said. Swing, a longtime U.S. diplomat, noted that "my own country was built on the backs of migrants, and with the talent and brains of migrants." The IOM says that 23,664 migrants arrived in Europe by sea in this year's first two weeks all but 362 of them in Greece. Last year, just over 1 million arrived. The asylum-seekers registered in Germany included large numbers of people from the Balkans.
RELATED TOPICS