Greece threatened with expulsion from Schengen over Syrian crisis 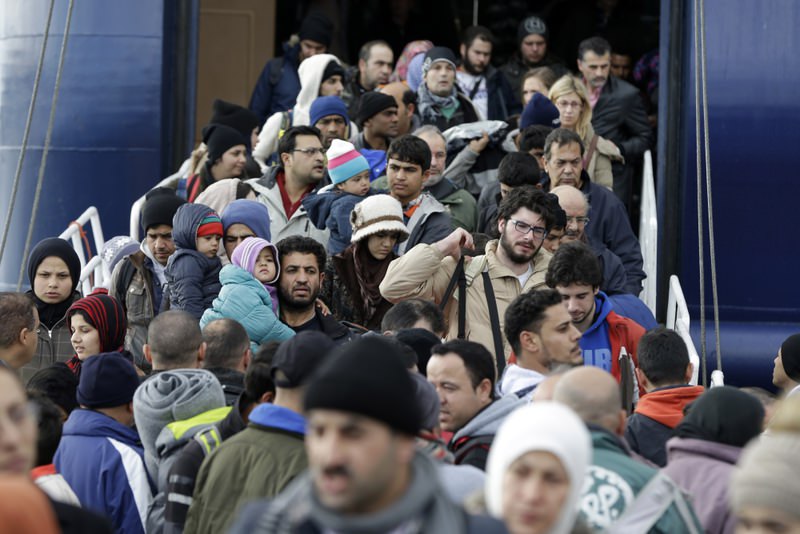 People disembark from a ferry after their arrival from the eastern Greek Aegean islands to the Athens port of Piraeus.
by Daily Sabah with Wires Jan 26, 2016 12:00 am

EU ministers met to tackle the refugee influx, stepping up pressure on Greece to bolster Europe's external borders against the influx of refugees, with Greece now threatened with exclusion from the Schengen agreement

European Union interior ministers Monday urged Greece to do more to control the influx of migrants, some threatening to exclude it from the continent's prized passport-free travel zone, as the crisis increasingly divides the bloc's members.

Greece was the main gateway to Europe last year for more than a million refugees and migrants who reached the EU. But it has been criticized for the failure to stem the flow of arrivals, which have shown little sign of stopping over the winter months. The EU has taken various steps to give the cash-strapped Athens financial assistance to deal with the crisis, but many EU member states believe Athens is not doing enough. Of five registration "hot spot" centers that were due to be set up for migrants arriving in Greece, only one is running so far.

Overwhelmed by the influx, Greek law enforcement officials have often let migrants through deeper into Europe rather than keep them on Greek soil for proper registration – the first necessary step agreed by the EU before people can move further.

Athens says the numbers are impossible to manage and blames the other 27 EU states for not offering real help. The crisis has put the passport-free Schengen zone – hailed by top EU officials as the greatest achievement of European integration – on the verge of collapse. "If we cannot protect the external EU border, the Greek-Turkish border, then the Schengen zone's external border will move towards central Europe," said Austria's Interior Minister Johanna Mikl-Leitner. "Greece must increase its resources as soon as possible and accept help," she said on arrival in Amsterdam for informal interior minister talks.

The Schengen zone comprises 26 states, most of which are also EU members. Germany, France, Austria and Sweden are among several countries that have introduced temporary border checks as they struggle to control the flow of people. "Speaking about timetables, it's already too late. We have seven countries with border controls," Sweden's interior minister Anders Ygeman told Reuters. He said migrant registration centers need to start functioning in Greece and Italy as planned. "In the end, if a country doesn't live up to its obligations, we will have to restrict its connections to the Schengen area. If you don't have control of your borders, it will have consequences for free movement."

Excluding Greece would require applying Article 26 of the Schengen code. Germany, the main destination for refugees and migrants fleeing war and poverty in the Middle East and Africa, first floated the idea last year. The Greek minister did not speak on arrival but the EU Migration Commissioner Dimitris Avramopoulos, himself Greek, sought to talk down the risk of excluding the country from Schengen. "Nothing like this has been proposed or discussed. What we have to do is to better manage our external borders. It's obvious that frontline member states must work more and here we are...to help them to better do their job," he said.

Luxembourg's interior minister was also against leaving Greece outside Schengen, while Germany's Thomas de Maiziere said that he wanted to preserve Schengen, but that time was running out.

Top EU officials have echoed Berlin's warnings recently that Schengen will not survive without a dramatic change in coming weeks in the way the bloc handles the crisis. However, EU countries are worried about growing anti-migrant sentiment at home and have failed to agree.

As the ministers arrived for talks at Amsterdam's maritime museum, they passed a protest by Amnesty International, a boat packed with mannequins in bright life vests designed to resemble migrants arriving in Europe. "Leaders of Europe, it's not the polls you should worry about," a sign said. "It's the history books."

Several European political figures warned multiple times that the passport free Schengen zone, one of the cornerstones of the European integration project since it was created in the 1990s, is in danger and emphasized the necessity of a common strategy to stem the migrant influx. The Schengen travel zone involves 30 nations, including some not in the European Union. Europeans, the commission says, make more than 1.25 billion journeys within the Schengen area every year. The Schengen area guarantees free movement to more than 400 million EU citizens, as well as to many non-EU nationals, businessmen, tourists or other persons legally present on the EU territory.

The majority of migrants come from the Middle East and Africa. The turmoil in the Middle East and the five-year war in Syria have led many people to flee the conflict in an attempt to seek security and shelter in more prosperous and peaceful countries. However, Europe has long been slammed for lacking a collaborative response to the crisis. Compared to Syria's neighboring countries, the U.N. refugee agency encouraged European countries to do more to share the burden of the international community in the migrant crisis. Turkey hosts the most refugees in the world, with more than 2.5 million refugees. Jordan hosts more than 630,000 Syrian refugees. while Lebanon hosts more than 1 million.
RELATED TOPICS