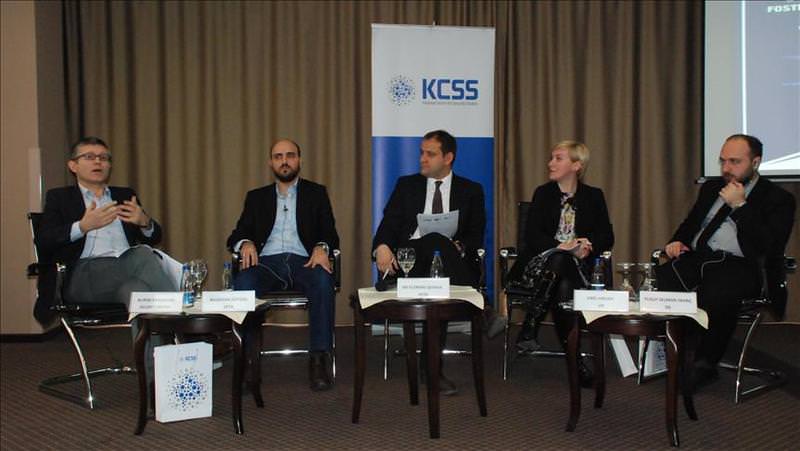 On a panel organized in Pristina, Kosovo, researchers, journalists and academics discussed how to address the problem of radicalization in the Balkans as well as what Turkey and Kosovo can jointly do to reduce it

In a joint event held on Monday co-organized by the Daily Sabah Centre for Policy Studies, the Foundation for Political, Economic and Social Research (SETA) and the Kosovar Center for Security Studies (KCSS) in Pristina, Kosovo, prominent researchers discussed the roots of rising radicalization in the Balkans. Several senior academics, journalists, politicians, imams and students joined the program, which was moderated by Florian Qehaja, the executive director and one of the co-founders of the KCSS.

The first speaker was Burim Ramadani, a Kosovar security expert, former member of the Kosovar parliament between 2011 and 2014 and member of the Parliamentary Committee for the Supervision of the Kosovo Intelligence Agency (KIA). The second speaker was Yusuf Selman İnanç, the international news editor at Daily Sabah. The third panelist was Sibel Halimi who is currently engaged as a lecturer in gender studies at the Department of Philosophy at Kosovo University and also a grants officer at the Training and Resource Center's (ATRC) Commitment to Equality (E4E) program. Bilgehan Öztürk, the fourth panelist, is a researcher at SETA and focuses on border security, the Syrian civil war, armed non-state actors, radical groups and radicalization.

Since radicalism has the potential to become a significant threat to the national security of countries in the affected region, the panel discussed and analyzed radicalization, violent extremism and border security in the Balkans and the Middle East. The KCSS outlined the goal for the panel on its website: "The conference aims to bring independent experts from Kosovo and Turkey, a number of policymakers and decision makers, representatives from civil society, the media, the international community in Kosovo and the religious community together to discuss the challenges that Kosovo and Turkey are facing [regarding] violent extremism and radicalism, and cultivate the best practices for countering and preventing this phenomena in the region."

Ramadani highlighted the fragile situation of Kosovo due to economic and political problems, and said such weakness gives opportunities to radicals. According to Ramadani, Kosovo suffers from the incapability of handling radicalization problems since its institutions are not sufficient to overcome them while the economy is the major problem. He added that despite the Kosovar police being successful at preventing the flow of Kosovars to the wars in Syria and Iraq, the problem must be approached as part of the other chronic regional problems.

İnanç said the radicalization problem is about ideology, and security measures are not enough to prevent it. According to İnanç, broader cooperation, including imams and Sufi leaders, is necessary to prevent radicalization. After providing definitions and the brief historical overview of Islam, Sufism and Salafism, he suggested that the traditional understanding of Islam may help combat Salafist imams who are accused of recruiting young Kosovars to fight in Syria. He also touched on the Turkish experience, and said the impact of Sufism in Turkish interpretations of Islam distinguished it from Arab models that aim to destroy regimes and create a purely Islamic state. He suggested that Turkey and Kosovo can cooperate in terms of religious education to prevent the young generation of Kosovo from engaging with the Gulf-funded Salafist imams.

Halimi approached the issue on the basis of gender and turned the attention to the women join radical groups, either voluntarily or compulsorily due to their husbands. She said the role of women is increasing, and a policy must be adopted that addresses women. She also said women can be used to de-radicalize men since in the majority of the cases, men join radical groups and their wives follow them.

Öztürk began his talk with an overview of the terror threats that Turkey is facing, and said DAESH, the PKK and the Revolutionary People's Liberation Party-Front (DHKP-C) are the main terror groups that frequently target Turkish security forces and civilians. Despite Turkey increasing security measures along its border with Syria, he said it is not always possible to control the 900-kilometer border. Concerning the flow of foreign terrorists who use Turkey as a transit point, he said Turkey has arrested hundreds of people who were willing to join DAESH. He added that broader cooperation among the countries in the region is necessary as Turkey cannot be left alone to deal with foreign fighters.

In early February, the same think tanks organized a joint panel session in Istanbul to discuss regional developments, focusing on growing radicalism in the Balkans and the Middle East as well as the fight against DAESH. Since radicalism has the potential to become a significant threat to the national security of countries in the affected region, the panel discussed and analyzed radicalization, violent extremism and border security in the Balkans and the Middle East.