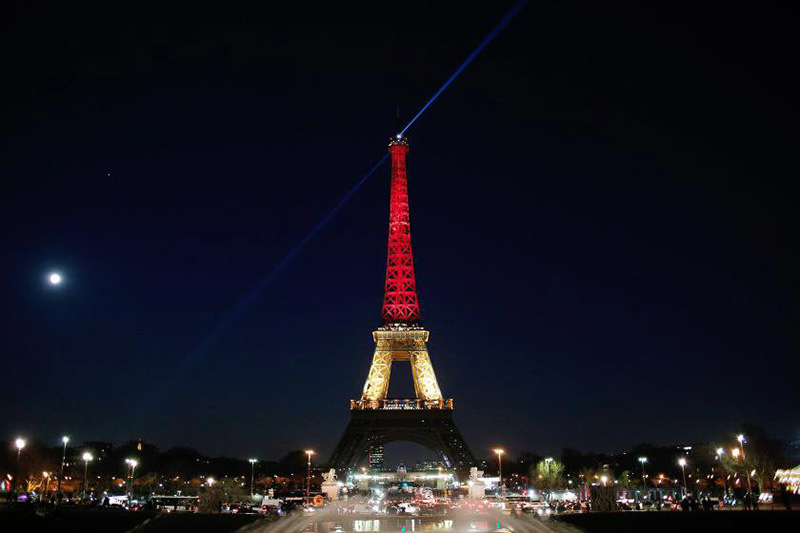 Supporters of Daesh terrorist organization conducted an online poll to determine their next target, asking "What will be the color of the Eiffel Tower in the next attacks?" in a forum website known to have support for the extremist group.

Mocking reactions to attacks in which landmarks were lit with the colors of attacked countries to show solidarity, with Belgium's black, yellow and red being the latest, at least twenty users replied to the al-Minbar forum website poll with United Kingdom receiving half of the votes.

Zaventem Airport and Maelbeek subway station in Belgian capital Brussels were the latest targets of the terror group, where 31 people were killed and 270 others were wounded in attacks conducted by three assailants.

Brussels was previously targeted by Daesh in May 2014 when four people were gunned down in Jewish Museum of Belgium.

On November 13, 2015, a series of attacks killed 130 people in French capital Paris, while five others were previously killed by a Daesh-linked gunman in January.

In many other attacks in Europe, North America and Asia, dozens were killed or injured in shooting, stabbing, car ramming attacks carried out by Daesh-linked assailants.

In Muslim countries adjacent to Daesh-held territories in countries torn by civil war, the death toll in attacks was also very high. Turkey, which shares a 900-kilometer land border with Syria, suffered the most casualties in such attacks. In 2015, the rallies of left-wing or pro-Kurdish groups were targeted in three different bomb attacks carried out in June, July and October, killing four, 33 and 102 people respectively while injuring hundreds of others. In 2016, 16 tourists were killed in January and March by bomb attacks in Istanbul's touristic sites. Many Turkish security officials were killed or wounded, mainly on the border with Syria, while trying to prevent attacks and infiltration by Daesh terrorists inside the country.

A total of 73 people, mainly tourists and security personnel, were killed in three different attacks in Tunisia, with most casualties inflicted in shootings in the resort town of Sousse and Bardo Museum of capital Tunis. The country has been under constant attack in recent weeks from Daesh-held areas in neighboring Libya.

All 224 aboard in Metrojet Flight 9268, mainly Russians returning home from Sharm el-Sheikh resort of Egypt, were killed in an explosion and subsequent crash in October 2015, amid the country's ongoing armed clashes with Daesh-linked groups in Sinai Peninsula.

Meanwhile in Syria, Iraq, Yemen and Libya, where Daesh controls territories to a differing degree, thousands of civilians were killed in attacks carried out in markets, mosques and urban areas, while thousands of others were killed in armed clashes between opposing groups, reprisals and in massacres and forced relocations amounting to serious war crimes.